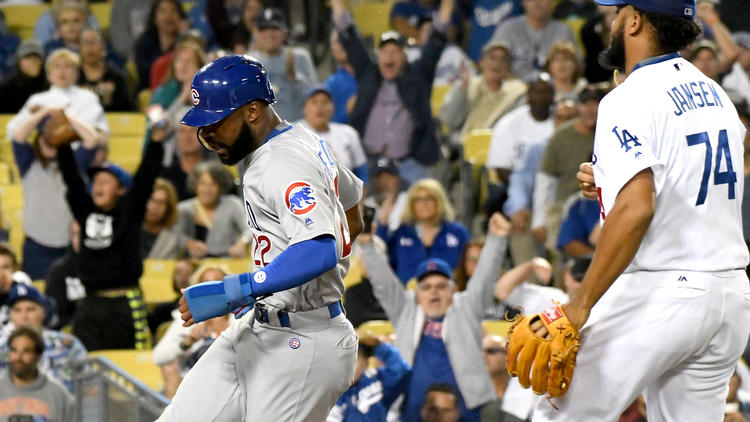 The Dodgers opened a weekend series with the 81-win Chicago Cubs tonight. To show just how serious they were taking the juggernaut Cubbies, they sent Bud Norris to the mound, and gave starts to  Kiké Enrique Hernandez, the Traded Flop, and the newest Dodger, Carlos Ruiz. Yay?

2nd inning  0-1
Norris walked one and struck out two.
Dodgers
Two on and one out for the MVP, Chase Utley.  A soft grounder to second brought an RBI and a tie game. 1-1

3rd inning  1-1
A 1,2,3 inning for Norris.
Dodgers
They gave Kendrick the leadoff spot tonight, and it paid off for the second time, as he earned a walk.
Corey Seager doubled to CF.
Justin Turner grounded out to shortstop and brought in the Dodgers’ second run. 2-1
The Dodgers ended up with bases-loaded and two outs for the Traded Flop. He struck out.

4th inning 2-1
Another easy and scoreless inning for Norris. 5 Ks
Dodgers on the corners with no out.
DP but Utley scored. 3-1

5th inning  3-1
With two on and two out Norris gave up a base hit to score one for the Cubs. 3-2
The Cubs tried to sneak a ground ball between Chase Utley and Adrian Gonzalez. Utley dove at it and speared it; while flat on his back, he threw out the runner at first to stop the tying run from scoring, and end the inning.


Dodgers
Two on and no out for the Traded Flop. Another strike out.

In his first game as a Dodger, Carlos Ruiz got on base with HBP, walk and a single.

The Traded Flop left 8 men on base. Just how long do the Dodgers think the season is? How much longer are they going to keep trotting this guy out there? He’s not contributing – in fact, he’s now hurting the club.

Kenley Jansen is starting to worry me. He was absolutely spooked by the runner on second, who was there by the way, because of a double he gave up on his very first pitch. He could not focus on the man at the plate, and wild pitched the tying run home. The blown saves are becoming more frequent for him at absolutely the wrong time of year.

Dodgers handed back a game to the Giants, and now lead by only one game. How big was not sweeping the Giants?

On the bright side: Corey Seager now has 36 doubles.