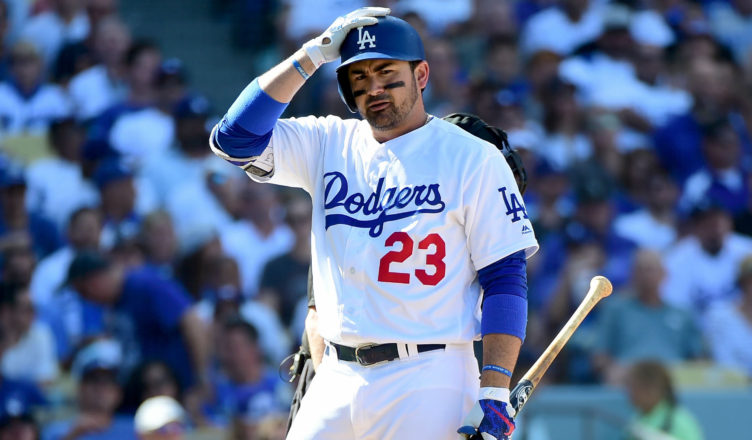 Gonzalez reported to work today with back tightness, which is likely related to the herniated disk that cost him two months of the season on the disabled list. After a meeting with Dave Roberts, it was decided – “mutually” – the best move would be to shut down Gonzalez for the last few games of the regular season and to leave him off the post-season roster.

Last night was Gonzo’s first start in a couple of weeks, and considering it turned out to be his last start, he went out with a bang. Gonzalez hit a long double, and in the seventh inning, this happened…

“Last night was such an emotional night, a special night. But coming in here today, the back tightened up. It’s obviously been his most difficult year of his career, very emotional for him to try to fight through it. Right now, as it stands, we’re going to shut him down so we don’t cause more damage. We’ll get him ready for next year, and expect him to respond to rest.” – Dodgers manager, Dave Roberts

This was undoubtedly Gonzalez’s most difficult season, as he missed most of 2017. First, with an inflamed elbow, and later, the back problems.

No one really expected Gonzalez to get more than one start (if that) in the post-season, but many were looking for Gonzalez to help the team in the playoffs with his experienced bat in a pinch-hitting role. He’s no longer the home run threat he once was, but he’s a prime example of a professional hitter – able to bring in RBIs with a well-placed single or double. There are also the intangibles of what his steady presence in the dugout could bring in a tight or tense playoff series.

The move to leave Gonzalez off the playoff roster will surely be welcomed by some, who see this development as an opportunity for Dave Roberts to cement Cody Bellinger at first base and free up a spot in the crowded outfield situation.

Gonzalez is expected to return in 2018 for the final year of his Dodgers contract, hopefully in complete health. For now, the mariachi have fallen silent at Chavez Ravine.

5 thoughts on “Adrian Gonzalez Shut Down for 2017, Off Postseason Roster”