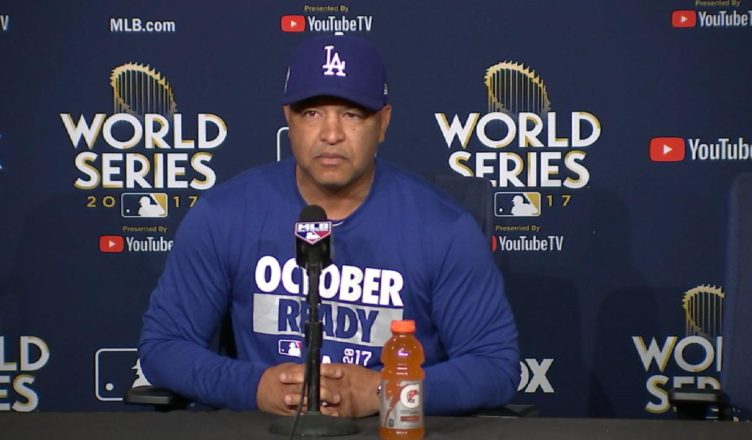 The Dodgers aren’t going to win every game. Nor is everything going to come up roses for them every night. The bounces won’t go our way every single game. That’s baseball. Sometimes you just have to shake your head in amazement at the sport of baseball. It leaves you breathless, agitated, shocked, and gassy all at once. The Dodgers lost game 2 of the World Series to the Astros on Wednesday evening 7-6 in 11 innings in one of the most incredible World Series games ever played. It didn’t work out for the Dodgers but we saw some incredible sequences and several Dodger comebacks. The series it tied as it shifts to Houston for games 3-5.

The first move that everyone has been questioning was the removing of starter Rich Hill in the top of the fifth inning. Hill wasn’t exactly dominant, but he was pitching well. Hill had only allowed one earned run through 4.1 innings and struck out 7. He walked three (one intentionally) and made just 60 pitches. It seemed as if he should have been at least allowed to work through the fifth inning. I don’t have any doubts in my mind he could have pitched another inning or more. Roberts gave him a quick hook, and replaced him with Kenta Maeda.

I understand the reasoning. The Dodgers don’t like to let the starters face the lineup a third time through the order. The numbers say that the pitchers are the least successful when facing a lineup for the third time. Mix that with a dominating Dodger bullpen that hadn’t allowed a run in 28 consecutive innings in the postseason and that could be understood. However the bullpen has been so good and pitched so many innings it’s unrealistic to expect these guys to be perfect throughout the playoffs let alone the rest of the World Series. Eventually one or two of them are going to allow something which should have been expected. That’s why Roberts should have lengthened the game by letting Hill pitch a little longer.

The Dodgers rallied in the fifth and sixth innings on a Joc Pederson solo home run and a Corey Seager two-run shot in the sixth to put the boys in blue up 3-1. A two-run lead is never insurmountable especially against the most dangerous offensive club in the American League. The strange pitching decisions continued.

Maeda was hooked early after giving up a single in the top of the sixth inning. With one out Tony Cingrani was called in and he got a huge double play to end the inning. He threw just one pitch and I wonder why he wasn’t allowed to go back out for the next inning.

Instead Cingrani was wasted and Ross Stripling started the seventh inning by walking the lead-off hitter and then he was taken out for Brandon Morrow. To Robert’s credit Morrow did get through the seventh and into the eighth. Morrow unfortunately gave up a double to start the eighth frame and the short leashes continued again as Kenley Jansen was called in for a six-out save. Roberts seemed spooked.

Here’s the thing, Kenley has pitched in every postseason game this year for the Dodgers. Normally he’s an automatic game closer and save clincher. However he’s not a machine and can’t be expected to pitch every game without ever allowing a run. So he allowed a run in the eighth on a grounder up the middle from Carlos Correa and the lead was cut to 3-2.

In the ninth Kenley gave up a one-out game-tying homer to Marwin Gonzalez and we were headed to extra innings. It was a strange sight seeing Kenley in the dugout of a tie game. Usually the game is over once he enters.

The problem there was that there were only two pitchers left in the bullpen, Josh Fields and Brandon McCarthy. Fields has a problem with home runs and he was terrible giving up two jacks to Jose Altuve and Correa to put the Astros up by two. Thankfully the Dodgers did tie it up in dramatic fashion in the bottom half of the tenth. Unfortunately they couldn’t walk-off and McCarthy was looming in the bullpen.

As predicted McCarthy gave up a two-run home run to George Springer in the top of the eleventh. The Dodgers once again tried to rally in the bottom of the eleventh but fell just short, losing the game by a run. At least the bullpen divers were in full force.

Roberts has been terrific all season long, but it’s fair to look at these moves in a vacuum while using a magnifying glass through a telescope. If the Dodgers don’t win the series we’ll look back at these moves and wonder while playing armchair manager all winter. There’s no reason to bag on Roberts, but there is every reason to analyze the odd moves.