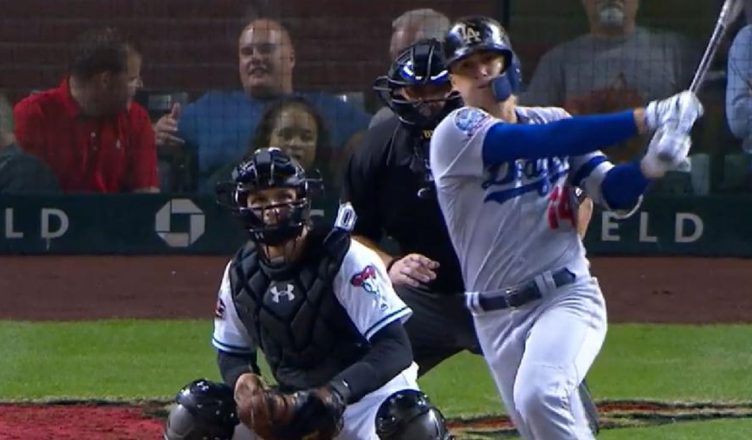 With the season winding down, the Dodgers find themselves in Arizona, trying to maintain their lead in the NL West, and slam the door to the postseason shut on the Colorado Rockies, who just won’t go away. After a greedy performance last night, from Clayton Kershaw, the Dodgers send their up-and-coming ace, Walker Buehler, to the mound.
Cody Bellinger got the boys in blue on the board quickly, with a solo home run to right field in the top of the second inning.
Nothing much happened offensively since that Bellinger home run, but the very good news was a Walker Buehler completely shutting down Arizona. Halfway through the game he was pitching a one hitter (naturally Marte had the only hit), and was just at 50 pitches.
Buehler’s human side kicked in in the sixth inning when he gave up a single and a walk with two out. After a mound visit, David Peralta took a fastball to CF for a double to cash in the runners and flip the game over, 2-1 Diamondbacks.
Down by a run, Yasmani Grandal opened the seventh with a towering TRIPLE to CF. Enrique Hernandez immediately followed with a base hit to score Yaz and tie the game.
In the bottom of the seventh, Roberts got cute with the bullpen. After a quick out from an effective Scott Alexander, he brought in Dylan Floro, who loaded the bases. Quick yank for the successful guy, leaves in the sucky guy to then give up the single to score the go ahead run.
Alex Wood came in with the bases loaded and caught a couple of breaks – an infield hit for the second out at home, a wild pitch that went to backstop, but the runner never left third base. Wood took it all the way down the line, going bases loaded, two out, and a full count, but he got a hot shot right to Justin Turner, that he caught around his right shin to end the inning. Whew, but Arizona was up 3-2.
Loafer Manny Machado opened the eighth with a line drive double. Trouble was, nobody could advance him. Things got dicey again in the bottom of the eighth, but Pedro Baez was able to escape without giving up any runs.
The ninth inning loomed ahead.
Kike led off the ninth with a base hit – and he followed with a stolen base, wild throw gift to third. Chris Taylor chased two strikes and walloped a GR double to the pool. Kike scored and the game was tied once again.
We went to the bottom of the ninth.
Kenta Maeda in. Eduardo Escobar hit one out. The bad guys walked off with a win into the Arizona night.
Load em up and try again tomorrow.