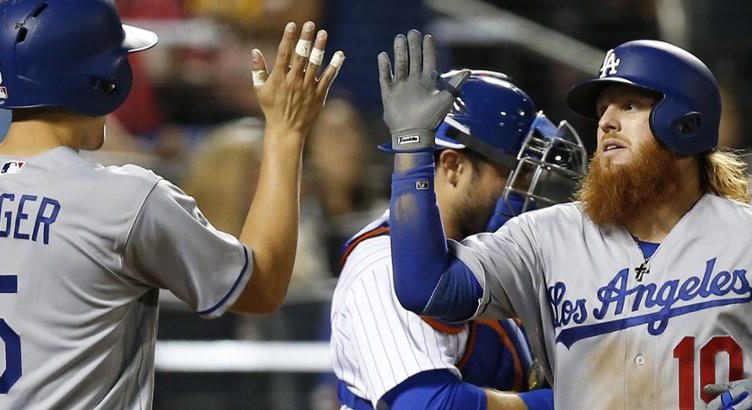 Tonight the heroes were Hyun-Jin Ryu, Cody Bellinger and Justin Turner – with a bit of Logan Forsythe thrown in.

It looks like LADR has once again done its part to aid the Dodgers by writing an article declaring the Dodgers bench ((or rest) a player, who then immediately goes out and turns his season around. We did it with Justin Turner, Chase Utley, and we may have possibly done it for Logan Forsythe, who broke out a key hit in the first inning of tonight’s game.

The Dodgers came on like big blue gangbusters right from the first inning. They rallied with two out (something they’re mastering) when Justin Turner was called out stealing second. The Dodgers won the replay challenge and Cody Bellinger made it men on first and second with a walk. The skipper pulled the string on a double steal. it worked! Logan Forsyhe singled up the middle, scoring Red and Belli, and the Mets were dead. They just didn’t know it yet.

The Dodgers weren’t done showing off. Chris Taylor tripled in the ninth, to bring Yasiel Puig home with the Blue Steamroller’s eighth run of the game.

And that’s only half of the story. The other half? The Mets were totally baffled and spanked around by Hyun-Jin Ryu. He was in command of all of his pitches, and he let the Mets know it.  He dominated for seven beautiful scoreless innings, only giving up one hit, no walks and he piled up eight Ks. Ryu was brilliant tonight.

The ball is now in Maeda’s court. It’s up to him to build on his last start because Ryu is showing he deserves to be in the starting rotation.

Cingrani [pitched the eighth and showed he’s got something worthy in the can. He struck out two while holding the Mets scoreless. Kenley Jansen came in to mop up in the ninth, just to get some work in, because he hadn’t pitched in a while. Besides that, the folks paid to see the Barnstormin’ All-Stars, so Jansen came in before the big blue show left town. He struck out the side and sealed the win at 8-0.

The Dodgers are off to Arizona. The season is winding down into a heck of a ride.