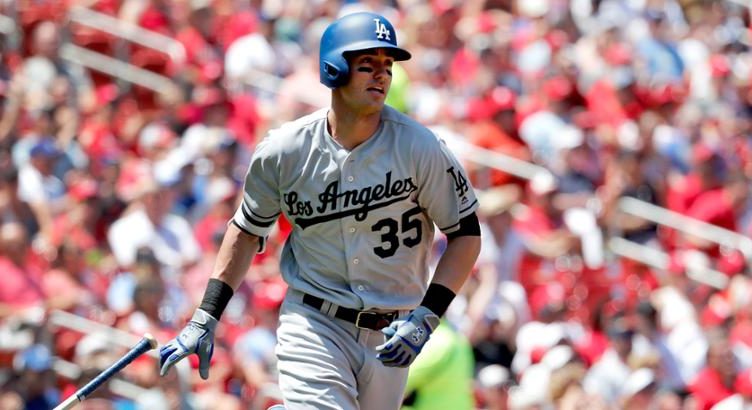 The red-hot Dodgers just completed a sweep of the Cubs, making the current world champs look like world-class chumps. Next on the agenda was a road trip to enemy territory, St. Louis.

Here’s how game one played out.

It was Rich Hill to the mound, trying to recover from a horrendous outing in his last start. This time we saw a completely different Hill, as he retired the first 10 batters he faced.

Meanwhile, the Dodgers offense brought the pain from both ends of their age spectrum. Chase Utley slammed a homer in the 3rd to open the game’s scoring.

and future rookie of the year Cody Bellinger cracked one out in the fourth to put the Dodgers ahead 3-0.

In the bottom of the fourth, Hill lost his magic and went wild. He walked and hit batters, and gave up sac flies. His dreams of a perfect game, turned to a score of 3-1, and lucky to be there. Amazingly, he was still tossing a no-hitter.

The no-no was quickly snuffed in the fifth. He didn’t surrender any more runs, but there was a but of nail-biting. Hill had two on, two out, and was struggling to find a strike. He escaped on a Dexter Fowler pop up, and his day was done after 5 innings and 86 pitches.

Pedro Baez took over for a scoreless sixth. Then the Dodgers small-balled another run over in their half of the inning, on a Yasiel Puig sac fly to bring in Chris Taylor. Dodgers 4-1.

Sergio Romo took over for a scoreless 7th. Logan Forsyhe joined the scoring party with a solo dinger to put the Dodgers up 5-1 in the 8th.

Chris Hatcher kept the birds scoreless in the eighth, and newly promoted Dodgers pitcher Brandon Morrow delivered a scoreless ninth. Then your faithful writer ran off to start the barbecue. Enjoy Memorial Day everyone, and remember we’re celebrating today because of the sacrifices that so many made for us on far away battlefields. Raise a cold one to the boys from Omaha Beach and Iwo Jima, and too many other places to list.