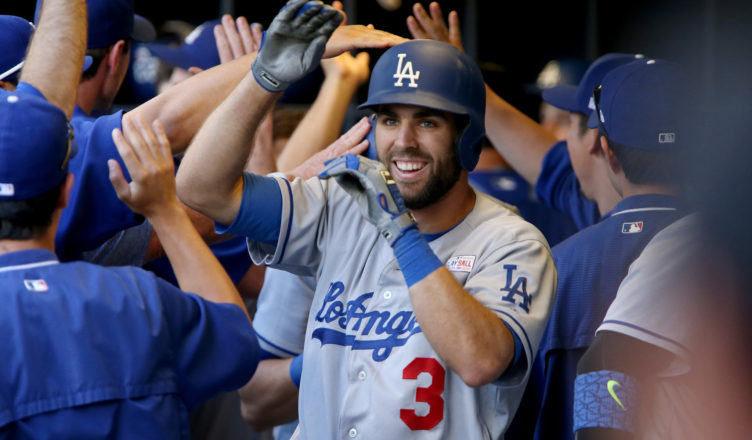 Taylor isn’t exactly a newbie. He was drafted by Seatlle back in 2012, and was named their Minor League Player of the Year in 2013. The next year he made his major league debut with the Mariners and he did pretty well, hitting .287 with eight doubles. He didn’t repeat or improve on that performance in 2015, most likely due to a broken wrist after being hit by a pitch.

Last year the Dodgers traded Zach Lee to the Mariners in exchange for Taylor, and that deal is starting to show some real dividends. Taylor has steadily been compiling an impressive array of stats – on both sides of the ball – ever since getting his chance to play for the Dodgers.

He’s a bona fide offensive weapon in almost any slot of the lineup, he hits for power, he’s speedy on the basepaths.

solid with his outfield glove (the speed again helps), and he’s letting the league know they should think twice before running on him.  Taylor now has four outfield assists, and he’s played five different positions, plus utility as a PH off the bench (batting .400).

Did I mention Taylor is leading the Dodgers with 12 stolen bases? For comparison, Yasiel Puig is second with 10 swiped bags, and after that, the Dodgers running game runs off the page into nonexistence.

Chris Taylor has five multi-hit games, and he’s batted in every spot of the lineup. Even when he’s not hitting the ball hard, he manages to spray base hits around. The key being his ability to hit to almost all parts of the field, for average and power.

Bellinger gets most of the non-pitcher attention from the media, but there’s a guy named Taylor who’s putting in some work, and deserves a good share of the spotlight as well.

4 thoughts on “On the Bright Side, Chris Taylor is Becoming a Big Blue Star”