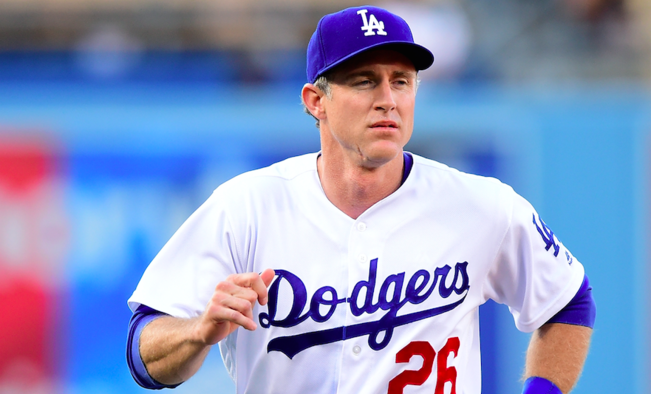 After the Dodgers allowed a close game to get away from them yesterday in Game 3 of the NLDS to fall behind 2-1 to the Washington Nationals.  The big question leading up to today’s game was whether the Dodgers should go with Clayton Kershaw on short rest or Julio Urias.  The Dodgers with their backs against the wall decided to go with Kershaw.  This was an elimination game for the Dodgers and boy was it stressful.

The game started off bad as Trea Turner singled and Bryce Harper walked.  Then Daniel Murphy singled in Turner and the Nationals took a 1-0 lead.  With two outs in the bottom of the first, Justin Turner was hit by pitch by Nationals starter Joe Ross, followed by a two run shot by Adrian Gonzalez who has been cold in this series to give the Dodgers a 2-1 lead.

In the top of the third Trea Turner singled again and was brought in by a Daniel Murphy sac fly to tie the score at 2-2.  In the bottom of third, Kershaw helped his own cause by having a leadoff double.  With two outs, Justin Turner then singled him home for a 3-2 lead.  Ross then loaded the bases and hit Joc Pederson and the Dodgers took a 4-2 lead.  That was the end of the night for Joe Ross.  Yasmani Grandal then came up with the bases loaded again and grounded out.

Once again with two outs in bottom of the fifth, Josh Reddick reached on an infield hit.  Joc Pederson then doubled him in to collect his second RBI of the day and give the Dodgers a 5-2 lead which at the time seemed safe.  Then the second guessing began as Dave Roberts left Kershaw in too long.  The Dodgers finally got to the Nationals bullpen.

The Dodgers blew a 5-2 lead in the 7th inning as the home plate umpire squeezed Kershaw on some close calls.  The Nationals tied the game 5-5 on a Dodger nemesis by the name of Daniel Murphy who singled in two runs to tie the game.  It was his fourth RBI of the day.  The festive mood of the stadium quickly turned into gloom expecting the loss to come.  At this point it was gut check time for the Dodgers as their season was hanging by the skin of their teeth.

In the bottom of the eighth the Dodgers showed the grit they have had all season.  Andrew Toles with two out was hit by pitch.  Andre Ethier made his first appearance of the series and hit a clutch single to move Toles to 2nd.  Then with two strikes Chase Utley saved the day and the season with a single to bring in Toles for 6-5 lead.  It was Utley’s only hit of the day and it was huge.

Kenley Jansen then came in and redeemed himself from yesterdays horrible outing to get the save and preserve the 6-5 win.

So the Dodgers force a game 5 on Thursday in the Nation’s capital. Rich Hill will be going for the Dodgers trying to get out of the first round. The Dodgers still have their backs against the wall and will be on the road against Max Scherzer. They will have to overcome this hurdle to move on. But for today we can rest a little easy.