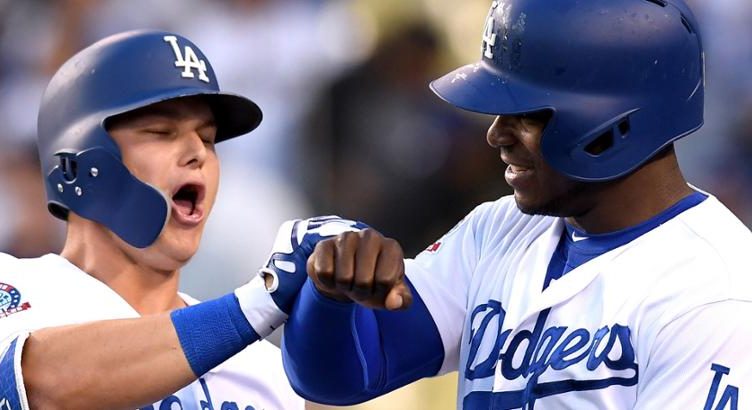 The Dodgers teed off on Colon and the rest of the Rangers’ pitchers for 16 hits and home runs from Joc Pederson, Max Muncy and Yasiel Puig.

Pederson struck first with a two-run shot in the second inning and later added two doubles.

Muncy followed with a big blast in the third inning for his team-leading 13th homer of the season.

This was his fourth consecutive game with a home run. Yasiel Puig completed the trio of bombs off Colon with a monster shot that screamed “GONE!” the second he hit it. That was during a raucous seven-run fourth inning.

45-year old Colon faced 21-year old Caleb Ferguson in his second start of the season. The Dodgers broadcast put up a fun split-screen shot of photos from  Colon’s inaugural ML season and Ferguson as an eight-month old. After being knocked about in his debut last week, Ferguson fared better tonight. He went four innings and 65 pitches, but I would have liked to see one more inning of work. Yimi Garcia and Edwin Paredes each went one inning in relief, followed by three innings of work from Daniel Corcino. Garcia picked up the win.

The Dodgers bats stayed hot with Puig, Turner, Pederson, Muncy and Chris Taylor rapping out doubles. Texas isn’t fielding a very good team this year, so they’re hitting the Dodgers buzzsaw at just the right time. Just think, the Giants are on the horizon.

82 thoughts on “Colon, Beltre Visit LA. Dodgers Welcome Them with Plenty of Bombs”