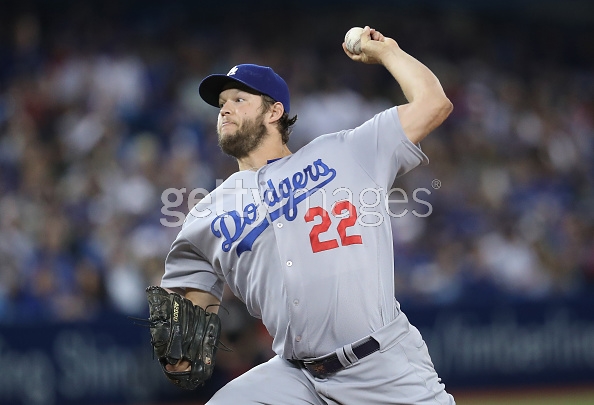 The second game of the series between the Dodgers and Blue Jays featured a battle between two Cy Young Award winners, Clayton Kershaw and knuckleballer R.A. Dickey. No further hype necessary.

Note to Dodgers manager Dave Roberts: Do not sit the hot home run bats, skipper!
Jays
Scored one to tie.
But the scary news was Kershaw was at 43 pitches at the end of the second inning.

3rd inning  Tie game 1-1
Chase Utley opened with a base hit.
Corey Seager followed with a single to third.
Justin Turner hit a single, and suddenly Dickey was surrounded by crocodiles with nobody out.
Wild pitch!
Utley came in, but was called out at the plate.
The Dodgers went to an  instant reply challenge.
Utley looked safe on a couple of replay angles. NY agreed, Utley was safe, and the run scored.
Adrian Gonzalez delivered the butter and eggs to drive in two with a clean single. Dodgers up 4-1.


The Dodgers broadcast team let us in on an amazing stat that blew my mind: Kershaw is 79 and 0 when he gets four or more runs of support. Amazing! I wonder what Jake Arrieta‘s stats are with four runs?

5th inning  Dodgers 4-1
Jays
With a man on second, Kevin Pillar hit a ball that Howie Kendrick had trouble with in left field. He actually batted it to the ground from shoulder height, effectively bouncing it off the fake grass and into his hand. That scored a run to make it 4-2.

7th inning  Dodgers 4-2
Dodgers
R.A. Dickey was definitely settled down. The Dodgers hadn’t had a base runner since the 3rd inning. The Dodgers’ bullpen will have to nut up to hold this slim lead.

The question in my mind was, would the skipper go right to Kenley Jansen for the 6-out save?  First Kershaw would have to survive the 7th.
Jays
He did!

8th inning  Dodgers 4-2
Dodgers
Justin Turner hit his first home run of the season. It was a solo shot to left field. Dodgers up 5-2.

9th inning  Dodgers 5-2
With Howie on first, Joc hit one under the glove of Barney for an error.
Carl Crawford then hit what 9 out of 10 times is an outfield gapper, but not this time. Pillar got on his horse and stretched ALL the way out to make a highlight, diving catch. However, Howie brought in the run on the sac fly. Dodgers 6-2.
Kenley Jansen vs Blue Jays
Jose Bautista – pop up. 1 out
Juan Encarnacion– K looking.  2 out
Dustin Smoak – base hit
Troy Tulowitzki – Hard hit, deep fly out to left.

The Dodgers put it together today behind their ace, with two home runs (one hit late in the game for insurance), Adrian Gonzalez hitting in the clutch, and the bullpen standing fast. A good team win to set up a Mother’s Day rubber match on the card.