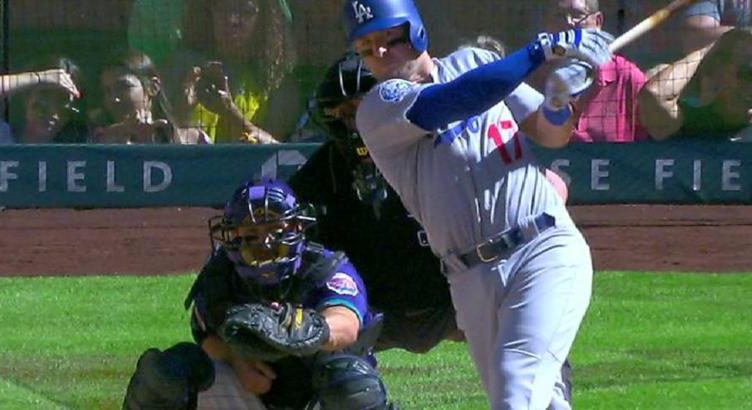 Wood looked like he was due for a short day, and the Dodgers a long one, when the game stood tied at a run a piece after two innings, but he was already 51 pitches deep. Wood hung tough and he held Arizona scoreless over the next three innings, giving way to Yimi Garcia in the sixth. Kyle Farmer, playing third base erred Paul Goldschmidt onto first base, Garcia gave up a couple of seeing-eye singles, and the Snakes took a one run lead. Garcia was done for the day, and four more bullpen Dodgers held the Snakes scoreless for the rest of the day.

The Dodgers scored in the second inning behind a solo home run from Austin Barnes.

They followed that with five innings of assorted hits but nothing to show for it. Then the floodgates opened for the boys in the top of the eighth.

With bases loaded, Cody Bellinger hit a sac fly to tie the game at two. A balk advanced the runners and intentional walk to Austin Barnes loaded the bases again. A wild pitch brought home the go ahead run and suddenly the pressure was off the Dodgers. A second passed ball brought Matt Kemp home with a head-first dive across the plate. The Dodgers scored twice, the score was 4-2 and Kyle Farmer hadn’t done a thing at the plate. When he did get a pitch to swing at, he swatted a base hit, Austin Barnes scored and the Dodgers were up 5-2.

Kenley Jansen came on to secure the game in the ninth, but I have no idea how easy or difficult it was for him, as the Facebook feed I was watching – the only feed anyone could watch – suddenly sputtered and only showed stills of the action every 20 seconds or so. It was like watching a game on some kind of 19th century technology. I wasn;t the only one experiencing the glitches and frozen feed as Twitter users lit up the lines with complaints. I hope the Dodgers and MLB never make us suffer through that again.

The Dodgers finish the Arizona series with a split, an emotional victory after receiving several body blows over the past week, and are now off the May-Hee-Koh for a weekend series against the San Diego Padres. Let’s hope the winds of fortune are now securely at their blue-tinted backs.