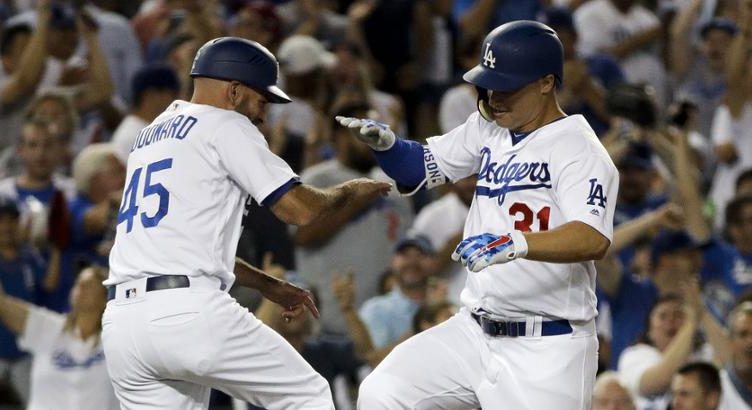 Hyun-Jin Ryu tried real hard, but he couldn’t get past five innings – once again. He gave up just two earned runs, but looked finished to Roberts, who brought in Grant Dayton to hold up a fresh 3-2 lead the Dodgers granted Ryu after he was lifted.

The Dodgers were baffled by Bartolo Colon for the first half of the game, but they figured something out in the fifth, when Yasmani Grandal and Joc Pederson smacked back to back homers, and Yasiel Puig hit a triple off the portly Colon.

That was the end of Colon, but the 3-2 Dodgers lead didn’t last long, because Grant Dayton and Josh Fields came in and quickly made the Twins very happy. Each man gave up a run (Dayton’s was a homer), and combined with a misplayed ball by Chris Taylor in the outfield, they coughed up the lead. After seven, it was Twins 4, Dodgers 3.

But these are the Dodgers we’re talking about, so as long as they have an out in them, they have a very real chance to come back and win.

In the bottom of the eighth, Chris Taylor made amends for his error with a base hit to lead off the inning. Corey Seager struck out, but up next was Justin Turner. Another base hit. Up after him – Cody Bellinger. As we said, it’s a long line up.

Minnesota lefty, Taylor Rogers had Bellinger 0 and 2 on two straight breaking balls. Would he throw a third? He did. He should’na, but he did. Cody responded with this…

Bellinger’s three-run bomb put the Dodgers on top to stay at 6-4.

The Dodgers gave 12-year minor leaguer Edward Paredes his major league debut in the eighth. Paredes pitched a one, two, three inning, but each of the outs was hard hit (one fly, and hot shot line drives down the lines). Kenley Jansen made quick work of the Twins in the ninth, and the first game was filed 6-4 in the win column.