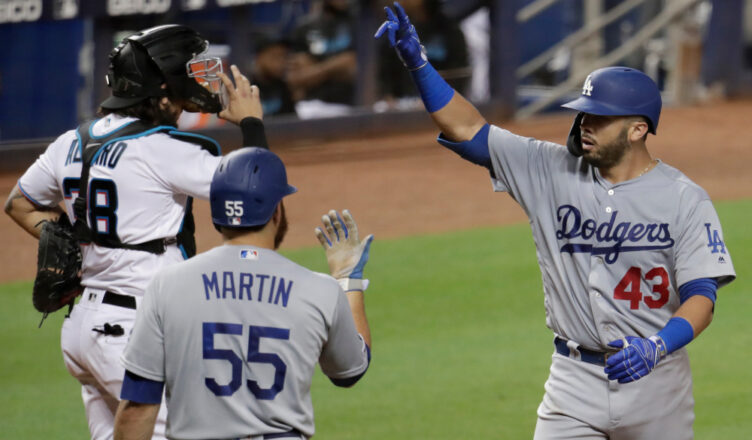 The Marlins are terrible. It’s an absolute joy playing them. After destroying the Fish 15-1 on Tuesday the Dodgers crushed the Marlins again on Wednesday by a 9-1 score. The boys in blue socked 6 home runs and 13 extra-base hits in the opener and then hit another four home runs on Wednesday. They’ve now outscored the Marlins 24-2 in the two games combined.

Wednesday’s bludgeoning featured Edwin Rios slugging his first two major league home runs. The 25-year old Puerto Rican native hit a solo home run in the fourth inning and then added a two-run shot in the sixth. Corey Seager, who homered the night before did it again and Justin Turner smashed his 21st home run of the season contributing another 1000 dollars to the Justin Turner foundation. Even reliever Caleb Ferguson doubled on Tuesday night.

The Dodgers excelled on the mound too. In the first game Dustin May pitched 5.2 innings of one-run ball and notched his first major league win. Then on Wednesday Clayton Kershaw tossed seven shutout frames striking out ten, walking none and allowing just two hits. Kershaw is now 12-2 and the win pulls him even with Sandy Koufax on the Dodger’s all-time win list for left handed pitchers.

The games were so much like exhibition games that Russell Martin entered the first game and pitched the bottom of the ninth inning. Once again for the third time this season he pitched a scoreless inning and is now a better pitcher then Yimi Garcia. Noteworthy was Adam Kolarek (who Martin is also better than) played first base. The Dodgers are so far ahead in the NL West that they will be experimenting with goofy lineups and defensive alignments. In the meantime the Dodgers will finish embarrassing the Marlins in the series finale on Thursday afternoon. The Dodgers are now 81-41, and 40 games above .500

On a side note, it’s unbelievable how awful the Marlins are. Sure they have an interesting ballpark but if you can’t put a semi-competitive team on the field then nobody is going to show up at the ball park which explains the empty seats and massive whistling throughout their cavernous stadium. Can you or anyone name more than one or two current players on the Miami squad? They’re not the worst team in baseball but they’re one of the worst and the worst in the National League. Derek Jeter should be ashamed of himself while he happily skips to the bank. The series wraps tomorrow and then the Dodgers head to Atlanta for the weekend.

38 thoughts on “The Dodgers are Crushing The Woeful Marlins”