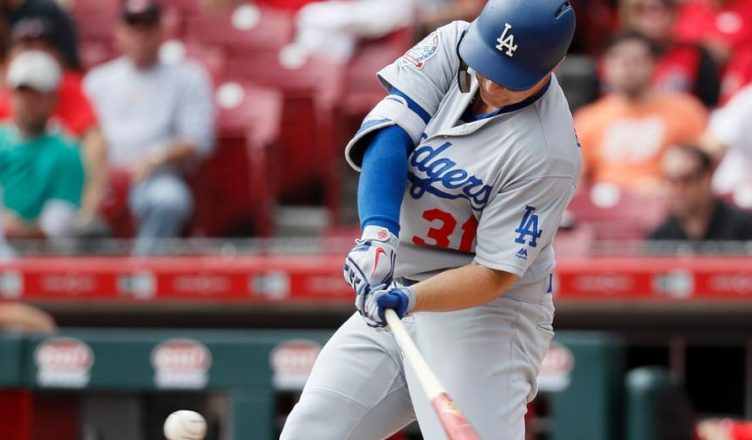 Ross Stripling took the mound today for the Dodgers, hoping to help the boys in blue avoid a sweep at the hands of the hapless Reds, and further frustration at the tail end of this often frustrating season. If the Dodgers hoped an early start time on a getaway day would be the charm to bring them victory, those hopes were quickly dented when old friend, Jose Peraza, took Stripling deep for a solo home run in the first inning. Further damage was inflicted when the Dodgers went nine up-nine down the first time through their lineup.
It took four innings to happen, but Joc Pederson got the Dodgers on the board with a solo, game-tying homerun – for the second game in a row. Which probably means he’ll be sitting out the next game.
A bit of controversy came up in the same inning when Yasmani Grandal hit a ball deep to right center field, but a young fan reached over the wall and caught it about 3 feet below the top of the wall. The umpires ruled the hit a double and awarded a run to Max Muncy, who was on first after singling earlier. Dodgers up 2-1.
Dave Roberts pulled Ross Stripling after 3 1/3 innings, but he only gave up one run and left winning.
The Dodgers stayed hot in the fifth, when Yasiel Puig singled, Pederson doubled, and Justin Turner scored them both with a two-RBI single. Later, Grandal and Cody Bellinger knocked in a couple more to put the Dodgers up 6-1.
The boys went up 7-1 behind doubles from Puig and Justin Turner. They tacked on another in the eighth.
The bullpen (pretty much everyone except Kenta Maeda) stepped up and did their jobs as well, holding the Reds scoreless from the fourth inning on, allowing the Dodgers to glide into an 8-1 win.
With 16 games remaining, the Dodgers head for home just one game out of first place. Stay tuned!