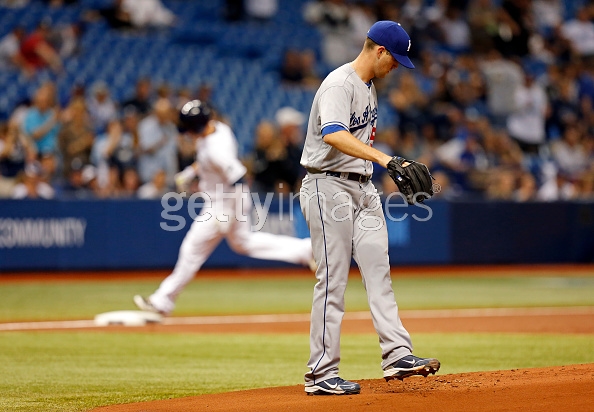 Nothing much happened for the Dodgers through the first three innings.

Game tied at two apiece – but not for long.
Rays
Without recording a single out, Wood gave up a three-run home run (the third homer of the night) and he put the Rays ahead 5-2. Clearly, Wood wanted the “mas struggling” title.
Bum out – Louis Coleman in.

The competition for mas struggling was going to be thick.

8th inning  Rays 8-2
Dodgers
Bases loaded and no outs.
Chase Utley walked to bring in a run.  8-3
Then the fourth walk of the inning came to Corey Seager. Another run in. 8-4

What’s this? The Rays wanted to be back in consideration for mas struggling.
Joc Pederson came up. RBI sac fly to left. 8-5
Carl Crawford came in and struck out to end the inning.

Don’t ever count ol’ CC out of the mas struggling race.

The Boys in Blue were never heard from again, and the game ended 8-5, with the Marlins on top.

Every weakness in this Dodgers team was exposed tonight. From bums in the starting rotation to bums in the bullpen, to not hitting with RISP, to washed up, overpaid bums off the bench, to over-reliance on charts and numbers that sat a home run bat from the night before.

Quien es mas struggling? Turns out it’s the fans who are struggling to remain optimistic about this club.