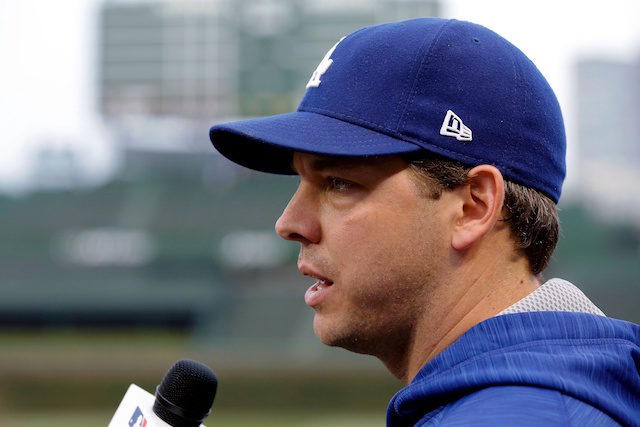 In the second Cactus League game of the spring, the Dodgers took on the Milwaukee Brewers at Maryvale Park.

Rich Hill took the mound and had a good first inning (1,2,3 on 12 pitches), despite being squeezed on the outside corner by the home plate umpire.

Hill’s second inning proved productive, with two K’s and a short fly ball to centerfield. His curveball was snapping off beautifully, keeping the Brewers’ batters off-balance. He finished his day with 21 pitches.

Justin Turner, Chase Utley and the Arizona sun combined for four Dodgers runs in the 3rd.

Chris Hatcher took over for Hill in the bottom of the third. Hatcher promptly hit his first batter with his first pitch, and followed that by giving up a two-run home run. Yikes! Dodgers were up 4-2

With bases-loaded in the fourth, Chase Utley showed off his wheels by beating out an infield single that sputtered out just past the mound on the third base side. Scott Van Zeppelin showed off the bat with a big double, and the Dodgers took a 7-2 lead.

New Dodger, ex-Padre, Brandon Morrow took over in the fourth and quickly found himself in trouble. He gave up four hits and three runs. ‬Dodgers 7-5

Kiké Enrique Hernandez misplayed a ball over his head in CF, allowing a run to score. Sun or not – that was not how to stay on the team when you’re sitting on the bubble.

Ross Stripling took over for the Dodgers in  the fifth. Trevor Oaks in the sixth. Between them the lead shifted to Brewers 8-7.

Top of the 7th: Rob Segedin blasted a high, hard one over the Big Blue Wall in CF to tie the game at 8-8.

Trevor Oaks got an extra inning and held the Brewers scoreless.
After several lengthy middle of the game innings, the HP ump must have been tired. He gifted Trevor Oaks an outside strike 3 to end the 7th. The ump squeezed Rich Hill on much closer pitches in the first.

In the bottom of the ninth, Alex Verdugo made a running, over the shoulder catch in CF that probably made the banana boy fade away just a little bit.

The Dodgers won 10-8, and Trevor Oaks picked up the win.