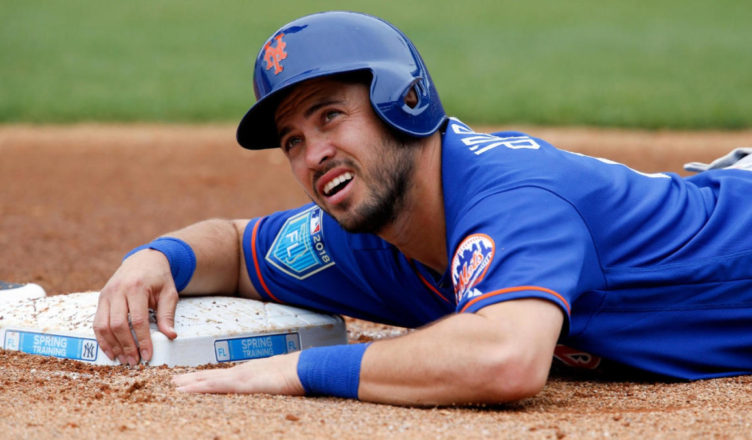 The Dodgers acquired Travis d’Arnaud a few days ago. The right handed hitting backstop had been recently designated and then released by the Mets only hours before the Dodgers picked him up. The move seems wise as the Dodgers are essentially getting d’Arnaud for next to nothing due to the Mets being on the hook for the remainder of his 3.5 million dollar salary. The Dodgers will pay him a pro-rated minimum salary for the rest of the season. It’s a win-win for the Dodgers. If he doesn’t hit, and it becomes a disaster then the Dodgers have lost nothing and virtually spent no money. However the Dodger’s announced plans for d’Arnaud’s usage are quite bizarre.

The Dodgers needed a right handed bat to balance out their lefty heavy lineup. With the injury to A.J. Pollock (he’s going to be out for a while) the Dodgers not only needed another righty bat, but they also needed another catcher. With Russell Martin being old and unlikely to make it through the season without getting injured again, the Dodgers certainly felt the need to add another catcher. Getting him for next to nothing was an added bonus.

The Dodgers obviously feel that prospect Will Smith is not ready for the big leagues yet. Martin’s age and injury history were probably more of a motivation than just seeing a right handed bat for free on the open market. So instead of installing a rocking chair for Martin in the dugout and having to play Rocky Gale anytime Martin’s back flared up, d’Arnaud seems like a much better option.

Only d’Arnaud has had his problems with injuries as well. He had a partial UCL tear back in 2018, and has also had wrist and shoulder problems. The Mets dumped him after he went 2 for 23 to start the season in 2019. The Dodgers recently announced that they would be using d’Arnaud as a multi-positional guy, moving him around from first base, and getting him playing time in the outfield. There’s only one problem with that, d’Arnaud has never played those positions in his MLB career.

Other than playing one game at second base, one game at third, and a few games in the minors at first base d’Arnaud has never played any other position other than catcher. He’s never sniffed the outfield in his professional career. Playing guys out of position, especially ones that have no experience at those respective positions can be a very dangerous experiment.

I have no problem with the Dodgers acquiring d’Arnaud. If he hits then this could be a very productive move. It can also allow the Dodgers for some good flexibility in late inning strategy with an extra catcher on the bench. But using d’Arnaud around the diamond is not a good use of his abilities. I understand the Dodgers love to move guys around, but playing d’Arnaud at first base, or the outfield robs established regulars of playing time. Guys like Alex Verdugo, Max Muncy, Chris Taylor, and Joc Pederson should not be having their playing time diminished for this experiment. I get that those guys need days off, but come on. This seems a little weird to me.

The Dodgers should use d’Arnaud like he’s supposed to be used. He’s supposed to be used as an occasional catcher to spell Russell Martin (and Austin Barnes) and occasional pinch-hitter off the bench against left handers. Even though he’s not performed well as pinch-hitter (3 for 27 .111) he has hit pretty well at Dodger Stadium. During his career d’Arnaud has slashed .304/.360/.565 in 25 plate appearances he is 7 for 23 with two home runs and a .925 OPS. I think if the Dodgers use d’Arnaud correctly they will get better performance and production. Not to mention they’ll save us and themselves a lot of aggravation.