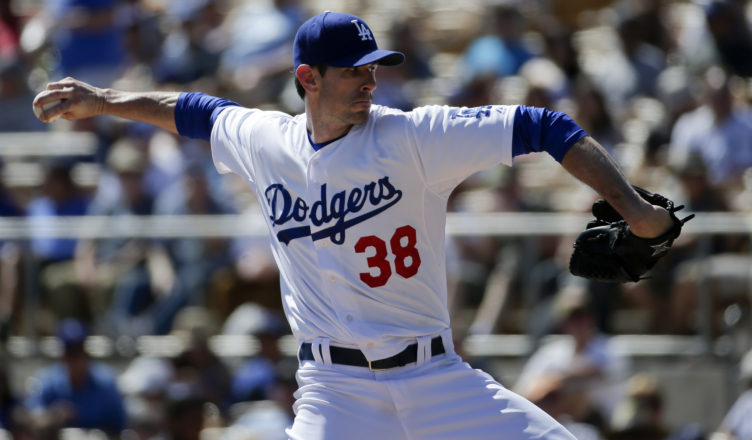 The Dodgers slapped the Texas Rangers around Arizona tonight behind the arm of Brandon McCarthy and the bat of Yasiel Puig. Use whatever adjective you like – it won’t be big enough to contain all the ways the boys in blue dominated the unlucky Rangers.

Here’s how it all played out:

The Dodgers let the Rangers know who was boss right from the get-go, as Brandon McCarthy recorded two quick outs, a single, and then nothing else.

Logan Forsythe led off the Dodgers’ half of the first with a double off the centerfield wall.

He hit a two-run bomb high into the grass beyond left-center field to give the Dodgers a 2-0 lead.

After recording only one out, and walking Joc Pederson, Cole Hamels was lifted amongst speculation that something was physically wrong with him.

Then Puig happened again. The Wild Horse punched his second homer of the night! It was still early, but Puig had two home runs, two bat flips, and 4 RBIs. The Dodgers went up 6-0.

The boys scrambled for four more runs in the bottom of the third to make it 10-0.

Brandon Morrow followed up for McCarthy, and he kept the Dodgers rolling by striking out the side in the fourth.

Julio Urias and his old-time high socks took over in the fifth. He continued the Dodgers’ dominance over the Rangers bats with a one, two, three inning, and two more Dodgers strike outs.

Urias had a good second inning as well. He was squeezed by the HP umpire and gave up a walk to the leadoff man. He got a double play ball, but Farmer lost the ball in his mitt, so he could only pick up one out. Urias struck out Delino Deshields and got a 4-3 to end his second inning.

Darnell Sweeny bopped a solo home run in the sixth to put the Dodgers up 12-0. Yup, twelve to nothing!

Josh Ravin entered in the seventh for the Dodgers, and was immediately lit up. He gave up a two run home run and a few base hits before ending his torture. This was pretty much the only down marker for the Dodgers tonight.

Patrick Schuster #62, a side arm throwing southpaw, came in for the boys in the 8th. He was straight dealing. Very impressive. He put the Rangers down in order with 2 Ks.

From the “Am I the only one?” department: Every time I hear Charlie Steiner say “Delino DeShields”, I don’t hear that. I hear “Pedro Martinez“. I may never let go of that one.

For the Logan Forsythe Marching and Chowder Society: Forsythe went three for three, with two singles and a double. He also scored a run. A good night for the Dodgers second baseman.

In fact, it was a good night for the Dodgers all around, the fans included.