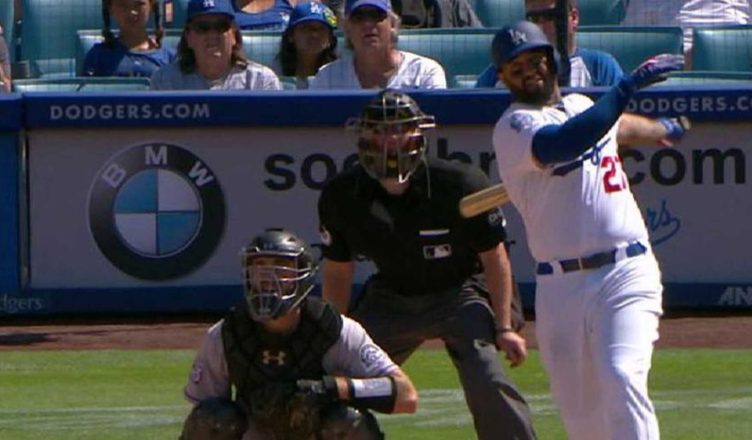 The Dodgers faithful turned out on a hot afternoon, and the boys did not disappoint. They scratched and eeked out four small-ball runs, but it was only enough to tie the Rockies, who had shut down the home run blasting Dodgers during the first two games of the series.

Ross Stripling took the mound today and gave up all four of the Rockies runs, but the Dodgers fought back and kept the game close with single runs in the first and third innings and two more in the fifth.

Matt Kemp had a grand day with four RBIs, which he picked up in the first, third, fifth, and again in the eighth with his tie-breaking home run. Max Muncy was on base all four times and scored two runs, but Yasiel Puig stole the show with a heads up play to score an insurance run in the eighth. Joc Pederson singled down the RF line, and when the Rockies bobbled the ball, Puig dashed for home, sliding head first (just like his Puigy Bank pose) just under the tag to put the Dodgers up by two.

Kenley Jansen finished off the Rocks one, two, three, with two Ks for his 22nd save of the season.

Next up for the Dodgers: The Pirates come to town for a three-game series starting tomorrow night.