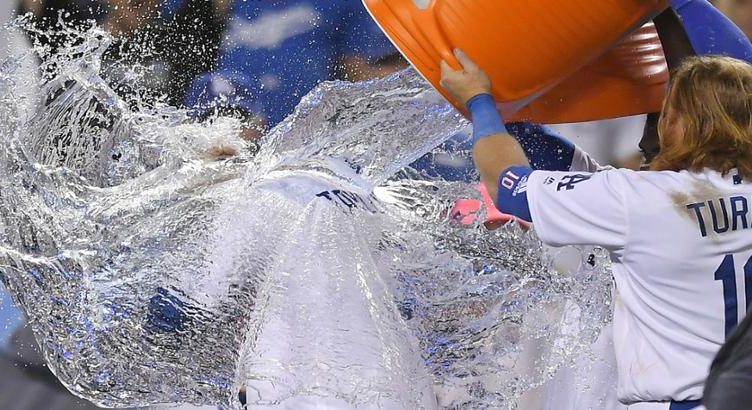 Tonight the Dodgers sent the resurrected one, Rich Hill, to the mound with orders to complete the sweep of the snakes, and further cement the Dodgers’ big blue domination of the NL West. Hill did not disappoint.

He delivered seven strong innings of two hit ball with nine Ks, but there were only two problems. One of them was he surrendered a booming home run to Jake Lamb, and the other was the Dodgers could only muster one solo home run of their own (Logan Forsythe) in support.

Hill left after seven, and the Dodgers bullpen immediately proceeded to give up the ghost. That collapse was led by Luis Avilan, who gave up two more solo home runs. The Dodgers were down 3-1 before Hill and the Dodgers knew what happened. The skipper quick-yanked Avilan out of there and brought in Brandon Morrow, who quickly calmed everybody down, especially Arizona’s bats.

Josh Fields and his prospectin’ beard came in for the ninth, and then HE gave up a run. Folks at the stadium started heading for the parking lots and I started thinking of witty “you can’t win ’em all” headlines for the recap.

But this is one of those years of the improbable – and that means the impossible could happen. And it did.

The snakes brought in Fernando Rodney and his ridiculo-cap to close out the game, but the boys in blue weren’t going along with that plan.

Yasiel Puig led off with a strong single, and then Rodney fell to the Dodgers’ ninth inning “walk ’em all” spell. Rodney walked Joc Pederson. Then he walked Cody Bellinger. Things were suddenly getting interesting, and the crowd started to get a buzz on.

Logan Forsythe, he of the earlier home run, walked to bring Yasiel Puig home and the crowd started getting louder.

The Dodgers were only down by two and people were starting to believe. Corey Seager came up and belted a single up the middle to score Pederson and Bellinger! The score was tied and everyone was going bonkers!

Rodney was gone and some new shlump came in for the snakes to face Chris Taylor. First pitch – BANG! A sharp single to score Forsythe with the fifth and winning run.

This whole thing is getting so crazy, Kenta Maeda might just win tomorrow.