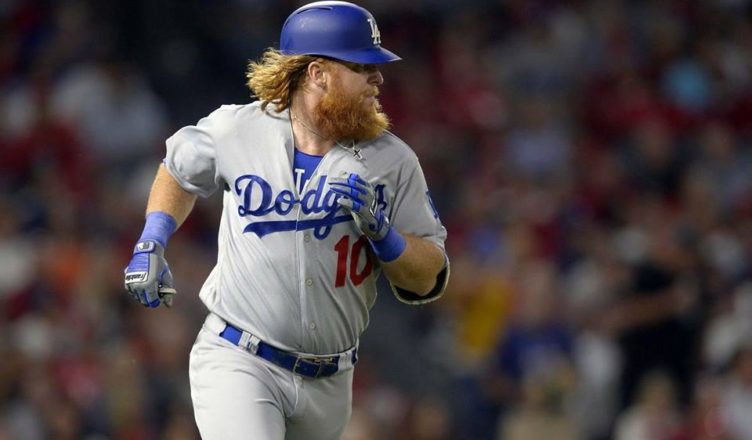 The Dodgers played the Rockies today with Rich Hill taking on Tyler Anderson. Anderson a left-hander normally would be an issue for the Dodgers. But lately he has been having issues. The Dodgers went to their all right handed lineup to take on Anderson. In the first inning the Dodgers got started as Justin Turner roped a single. Manny Machado then doubled him in to make the score 1-0. David Freese roped a single. On the play Manny Machado went home and ended up scoring on a play at the plate in which the catcher dropped the ball.

In the bottom of the first, Charlie Blackmon led off the game with a homerun. The score was 2-1 Dodgers. In the top of the 2nd, Kike Hernandez homered and the score was 3-1. With two outs, Brian Dozier walked. Then Justin Turner hit a ball that Matt Holliday misplayed and Dozier scored and the score was 4-1. In the bottom of the fourth, DJ LeMahieu hit a fly that Matt Kemp misplayed and ended up with a triple.  He ended up scoring on a ground out. In the top of the 5th, Matt Kemp led off with a single. David Freese then walked. CT3 hit a double and scored two runs. The score was 6-2 Dodgers.

Tyler Anderson only lasted into the third inning for the Rockies. In the top of the sixth, Cody Bellinger pinch hit for Dozier and walked. Justin Turner hit a two run shot and the Dodgers led 8-2. In the bottom of the sixth, Charlie Blackmon doubled. DJ LeMahieu doubled to score a run for the Rockies. That ended Rich Hill’s day. Pedro Baez came in having pitched well of late and gave up a two run shot to a slumping Nolan Arenado. The score was now 8-5 Dodgers. Caleb Ferguson pitched a scoreless 7th inning.

20 home runs for @kikehndez! Dodgers are off and rolling against the Rockies.

In the bottom of the 8th, Ferguson gave up a homer to Charlie Blackmon and the score was 8-6. The Dodgers had opportunities to add more runs but couldn’t.  Now this game felt like it was up for grabs. Kenta Maeda came in and walked Arenado. He was able to strike out Trevor Story and get Matt Holliday to fly out to get out of that inning. In the top of the 9th, Kike Hernandez led off with a triple. Alex Verdugo would end up singling him in and the Dodgers took a 9-6 lead. Maeda pitched the 9th and gave up a lead off single to Ian Desmond.

Scott Alexander then came in to try and finish off the game. Gerardo Parra fouled out with Alex Verdugo making a great play. Chris Iannetta then flied out to Puig who made a great play. Matt Valaika then came in pinch hit with Charlie Blackmon on deck representing the tying run. Valaika ropped a line drive to center field that was caught by Chris Taylor and the Dodgers won. Dodgers are 0.5 back of first and 1 game behind the Cardinals for the second wild card. On to Cincy.