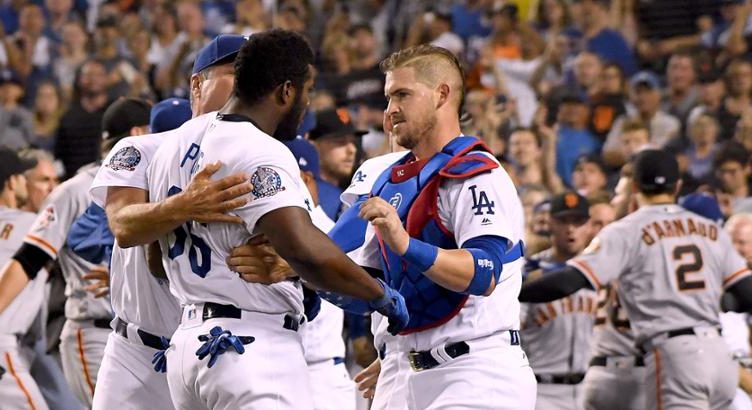 The Dodgers have thrown everything at their opponents for the past week than an offense and an effective bullpen. The results have been four straight losses to NL West opponents.
Tonight, In the second of three games against the Giants, the Dodgers threw lefty Alex Wood out to the mound, with the impossible task of winning the game all by himself.
Despite hitting a batter and giving up a couple of singles, which resulted in a Giants run in the second inning, Hill held his own against the Giants quite well. That was the only run he gave up, but the trouble was, he only lasted five innings.
Meanwhile, The Dodgers’ offense was doing absolutely nothing, and that one run looked like a monumental hill to climb.
JT Chargois and Caleb Ferguson combined for a scoreless 6th and 7th innings, and meanwhile the Dodgers continued to do nothing on offense.
And then the lid blew off! Yasiel Puig was batting in the 7th, when he fouled off a pitch. Puig said something to himself, and Giants catcher Hundley (still in his crouch) said something to Puig. Puig answered, Hundley rose and they continued jawing at each other.
Puig shoved once, then twice, and the benches cleared. Puig was red hot and was barely held back by Dodgers players and coaches. He got close enough to reach over someone’s shoulder and deliver a glancing slap to the catcher’s mask.
The scrum comtinued, Hundley was dragged to the ground, Puig pulled away, and when everything was settled, the former batter and catcher were both ejected.
Then in the 8th, with 2 out, Justin Turner banged out his third double of the night. Manny Machado, who hasn’t had a hit since the Reagan administration, stepped up with a big base hit to drive Turner home with the tying run.
Kenta Maeda came on in the ninth, and with two on, made a great play on a bunt to take out a runner headed to third base.
Again with two on, Maeda gave up a base hit to CF. Enrique Hernandez got the ball in and threw home – once again Yasmani Grandal could not hold on to the ball, and the go-ahead run scored. Kiké’s throw was a bit high and to the wrong side of the plate, so all the blame may not rest on Grandal this time. Regardless, the Dodgers were behind 2-1 with three outs left to change things.
Matt Kemp, at something like 2 for his last 57, flied out for the first out of the ninth. Grandal struck out on three pitches, and Max Muncy, the last hope for the boys, struck out on a pitch that was just to the right of the Dodgers dugout.
The Giants win 2-1 and look for the sweep against Hyun-Jin Ryu tomorrow.