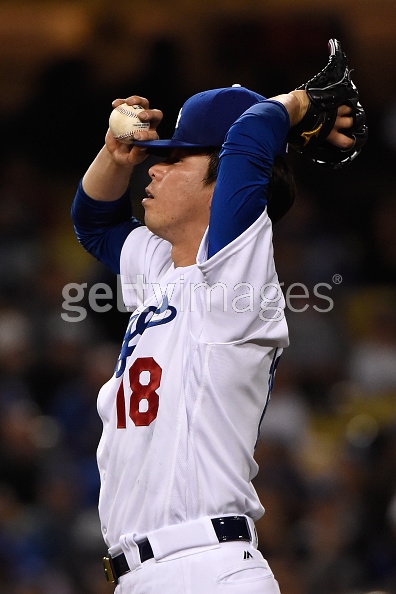 The Dodgers and Angels opened their four-game Freeway Series tonight at Chavez Ravine, and just like a pleasant drive on the 5 freeway, it took seemingly forever to arrive at the end.

The Dodgers had won 6 of their last 9, and the Angels just swept Seattle, so both teams were primed for the pump. Here’s how the game played out.

3rd inning  Dodgers 2-0
Angels
Maeda gave up back to back doubles, and as comic relief, CC made a ridiculous attempt at a throw home. 2-1.
Maeda was definitely in trouble as he eventually ended up with bases loaded to Mike Trout.
First pitch base hit to drive in two.  Angels 3-2.
Then Albert Pujols with another base hit and another run. 4-2.
Finally, Maeda got a 3-6-1 double play to end the inning.

4th inning  Angels 4-2.
Dodgers
No sooner did Vin Scully mention the Angels give up lots of home runs, when Trayce Thompson went KABOOM to CF. 4-3.

5th inning Angels 4-3
Maeda out after 73 pitches and 4 runs. Chris Hatcher in. He gave up a two-out double to Mike Trout, but otherwise, a scoreless inning.
Dodgers
Scoreless as well.

6th inning  Angels 4-3
Angels
Believe it or not – another scoreless inning from Hatcher.
Dodgers
Haven’t been heard from since the second inning. It’s only a one-run game, but it feels like they’re down ten runs.

Note: Adrian Gonzalez took himself out of the game after his at bat.  Turned out he had back tightness. Who knows when we’ll see Gonzo again?

7th inning  Angels 4-3
Angels
Hatcher out, Pedro Baez in.
He loaded the bases with no out for Albert Pujols. Roberts left him in.
First pitch base hit to score two.  6-3.
Baez gave up another run and all the while pitched INCREDIBLY slow. The half inning was a half hour long.
Dodgers
Howie Kendrick knocked in Charlie Culberson, who originally got on with a walk. 7-4
The Angels let the Dodgers back in the game with a couple of walks.
Yasmani Grandal then picked up the Golden Sombrero to kill the Angels’ charity.

I thought it was strange that Maeda was pulled after just four innings and 73 pitches. Sure, Maeda was struggling, but it was only a one-run game, and Roberts had run through most of the bullpen last night. What did he plan to use for the next five innings?

I figured they would push Maeda for another inning, perhaps two if he got away cheaply in the fifth. Sitting him with more than 50% of the game to be played makes me think Maeda is injured.

Besides all that, this game was anybody’s up until the seventh. The Dodgers’ batters simply did nothing to put together any kind of rally after the second inning.

Although they scored six runs on the night, they never put together a string of hits. It was basically all done with cashing in two walks and two home runs. And those homers are all coming from the young players.

Thompson, Pederson, and Seager are all tied with six home runs. It’s now past time to play these guys every night, and win or lose with them.