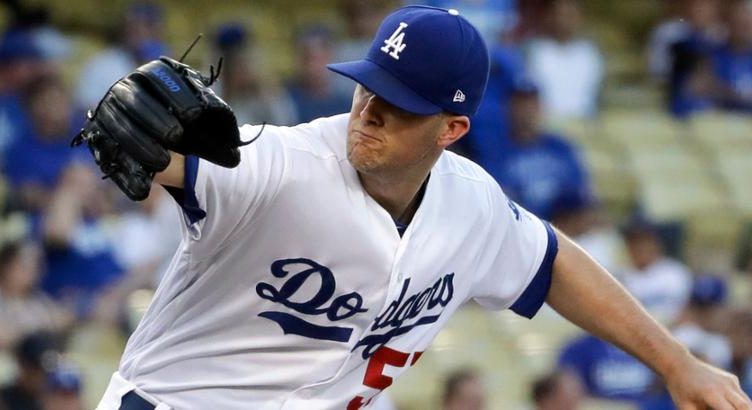 This game had it all. Fantastic Dodgers pitching, glorious Dodgers hitting, old friends across the diamond, a beanball war, and almost a cycle. Whew.

Here’s how it went down…

Things started off conservatively as the Dodgers small balled their way to a 1-o lead on an Austin Barnes RBI ground out.

In the third inning the Dodgers opened the Friday night fireworks box early. They scored one more rune run on a big Chris Taylor bomb,

and another with more small ball. This time the RBI was brought to you by the Banana Kid, Enrique Hernandez.

In the next inning, the big blue bats of the Dodgers split the Friday night skies again when Brett Eibner hit a two run shot to put the Dodgers ahead 5-0.

Meanwhile, last weeks NL player of the week was quietly slicing up the fish. Through seven innings the Marlins had a mere four hits, and Alex Wood was piling up scoreless innings.

Wood left after 7 1/3 with two on, one out, and 18 consecutive scoreless innings that stretched back to his last couple of starts. Ross Stripling came in and quickly got a double play to end the inning.

In the eighth inning, Cody Bellinger pounded out yet another two run home run, putting the game out of reach at 7-0.

Then the punk closer for the Marlins, drilled the next batter, Brett Eibner, with a fastball smack in the middle of his rib cage.

When the fish came up in the 9th, Stripling immediately threw one about an inch behind Giancarlo Stanton and the benches immediately emptied onto the field.

This was a much more mean-spirited meet up than the one the Dodgers and Giants had on Wednesday afternoon. Marlins skipper Don Mattingly came very close to blows with Dodgers coach Bob Garen. When the smoke cleared, it was still the ninth inning, Stripling was tossed, and Chris Hatcher took over for the Dodgers. He went right after the still-steaming Stanton, and struck him out to the delight of the crowd and the Dodgers dugout.

Then Hatcher reminded us all that he’s still Hatcher, and he quickly gave up a homerun to the very next batter, ruining the shut out. Then he gave up a single, a double and a sac fly to make things more interesting, but not in a good way. Kenley Jansen had to get up in the bullpen and start warming up, but Hatcher managed the third out and the game was thankfully over.

Don’t scare me like that: Yasiel Puig came out of the game after for the fourth inning. During his at bat in the fourth, Puig looked as though he tweaked something in his back. He was checked out at first base, and stayed there, eventually scoring on Eibner’s home run. Then he was lifted. Precautionary?