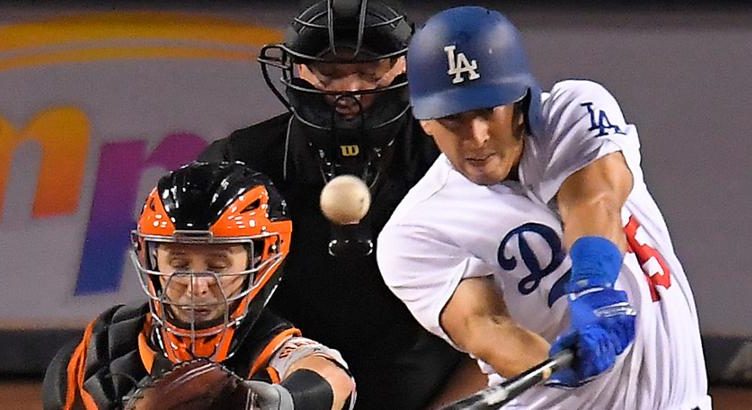 Justin Turner was still out of action, nursing a “viral thing”, as skipper Dave Roberts referred to it. In additional news, the Dodgers dodged a couple of bullets injury-wise during the game. First, Hyun-Jin Ryu was knocked from the game in the third inning when he took a line drive off his throwing arm. He’ll have a heck of a bruise tomorrow, but the good news was x-rays came up negative.

Later, Yasiel Puig was thrown out for the final out of the game while trying to steal second base with two out. He approached second awkwardly, and he didn’t slide. He stretch-stepped it to the bag and grimaced in pain immediately afterward. Later, he said he twisted his ankle. Expect to see Puig on the day-to-day list.

Brandon McCarthy came out of the pen tonight for the first time since early July. He pitched two innings and gave up the Giants’ second run. The Giants scored the first run of the night off Ryu in the first inning. The Dodgers scored their lone run in the seventh when Austin Barnes smacked his seventh homer of the season to bring the boys within one, but they just couldn’t string anything together and pull out the win.

It was just as well, since they are probably in a hurry to get a good night’s sleep after last night’s madness. Clayton Kershaw will take the mound tomorrow – on six days rest. That usually doesn’t turn out well, so look out below!

11 thoughts on “Hungover Dodgers Lose Close One to Madbum and Giants, 2-1”