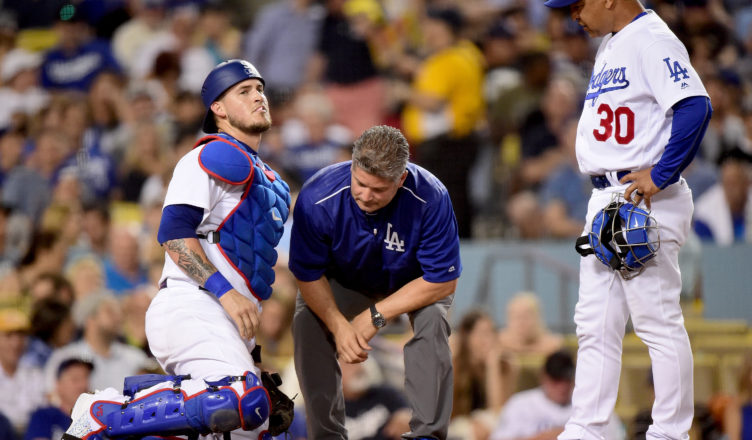 Dodger baseball just wouldn’t be Dodger baseball without a ton of injuries. Last season the Dodgers set records for most days on the disabled list and most players on the DL. For whatever reason the current group of Dodgers are injury prone and have trouble going even a few days without getting hurt. This is a big reason the depth of the farm system is so important to the club’s success.

One could argue that the Dodgers front office should acquire healthier players. However when the entire roster is like a mash unit then there is little the front office can do other than continue to strengthen the franchise’s overall depth and stockpile players. It’s not like they can just get rid of everyone and start over from scratch. In other words, what are you gonna do? Most of these players get hurt a lot. As the franchise infuses the roster with younger players these injuries should decline.

Not surprisingly the injuries have returned this season. A small group of players are already nursing various injuries during spring training. The good news is that most of the injuries don’t appear to be serious. However it is really annoying.

Southpaw starter Scott Kazmir (always hurt) left his last start on Monday afternoon after only one pitch after experiencing hip tightness. Kazmir had an MRI on Tuesday that revealed no structural damage. The Dodgers will allow Kazmir to throw a bullpen session on Friday before they decide when or if he will appear in a game.

Outfielder Andrew Toles missed his third game in a row after hyperextending his knee. Toles might return to the Dodger lineup this weekend. Then there is shortstop Corey Seager.

Seager has missed time this spring after suffering a back injury. He was supposed to return on Friday, but now it appears that that will not happen. Manager Dave Roberts has told the media that the injury is minor and doesn’t expect for it to affect Seager’s opening day status. Let’s pray that he is correct. The Dodgers are screwed without Seager.

Veteran outfielder Andre Ethier has been dealing with back spasms. He first felt it on Monday and Dodger management has cleared him to swing a bat. No word on when he’ll be back in game action. Reliever Pedro Baez is battling a thumb injury which has kept him sidelined for the majority of the spring. He was struck by a line drive a couple of weeks ago during practice.

NRI Henry Ramos has a torn groin. He is expected to be out for six weeks. The injuries just keep going on and on and on. Fortunately the Dodgers really do have excellent organizational depth which helps combat the constant injury problems. They’ll get through it. They’ll deal with it. They dealt with it last year and still managed to win 91 games, another NL West title and reach the NLCS.

At times it won’t be pretty to watch. There will be times when Kike Hernandez is batting lead-off and playing his unique brand of terrible baseball and 10 pitchers will be on the disabled list at the same time. But the Dodgers usually have versatile skilled players (except for Kike) that can step into the fold and keep them in games until the starters recover. Injuries are just a part of Dodger baseball now and we’re just going to have to get used to it.

23 thoughts on “Injuries Keep Mounting For Dodgers, Get Used To It”