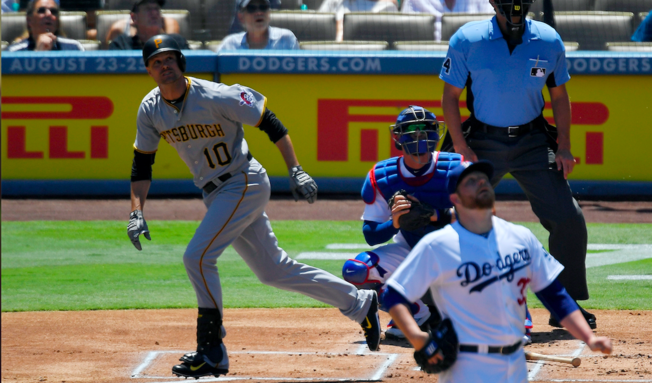 At this point the game was semi-legitimately within reach.

2nd inning  1-5
Officially chalk up another broken Dodger pitcher. Anderson was pulled, and Brock Stewart was brought in.
He gave up no runs (but he sure came close).

4th inning  1-5
Two singles and a stolen base made it 1-6. The nightmare just got worse.
Dodgers
Joc Pederson got his second home run in as many days. Unfortunately, no one was on base for him to drive in. 2-6

The game was still conceivably within reach. Right????

5th inning  2-6
Bucs
Josh Reddick lost a fly ball in the sun. This resulted in a sun double, and another run. 2-7

9th inning 3-7
Just for laughs, the Pirates hit one more home run, courtesy of thier Korean import, Jung Ho Kang. Also his second home run in as many days.  3-8
Another few hits brought in the ninth run for the Pirates.
By this point the Dodgers have joined many of the fans in just not caring any more. Two more runs scored to make it 3-11.

The thrashing finally stopped, and the Dodgers were finally out of their misery. Game over, first place seemingly a million miles away.

Well, loyal readers, the smoke has cleared and the mirrors are all cracked. The makeup has been washed off and the harsh, bright LA sun is showing off the Dodgers as they truly are. Without starting pitching, and with an offense that is more elusive than a pot of gold at the end of a rainbow.

Even the die-hardiest of Dodger blue fans are going to have to admit there is not much behind the curtain. The front office has gathered a mess for a pitching staff, and there isn’t much for the fans to hang their hats on for hope.

Tomorrow is another day and another series, but the Giants are going to tart winning again – any day now – and I really don’t see any reason to believe these Dodgers are going to follow suit.
Just because I can’t allow myself to be THAT cynical: one bright spot, Joc Pederson hit his 18th home run.
Just for shite and giggles:
Brett Anderson went 1 inning with 5 hits, 5 runs, 2 HRs, 1 walk, 0 Ks.  ERA 45.00 That’s right! 45!!!
Team with RISP: 2 for 9  Yeah, yeah, yeah.

110 thoughts on “It’s the Pitching, Stupid! Brett Anderson Flops Under the LA Sun”