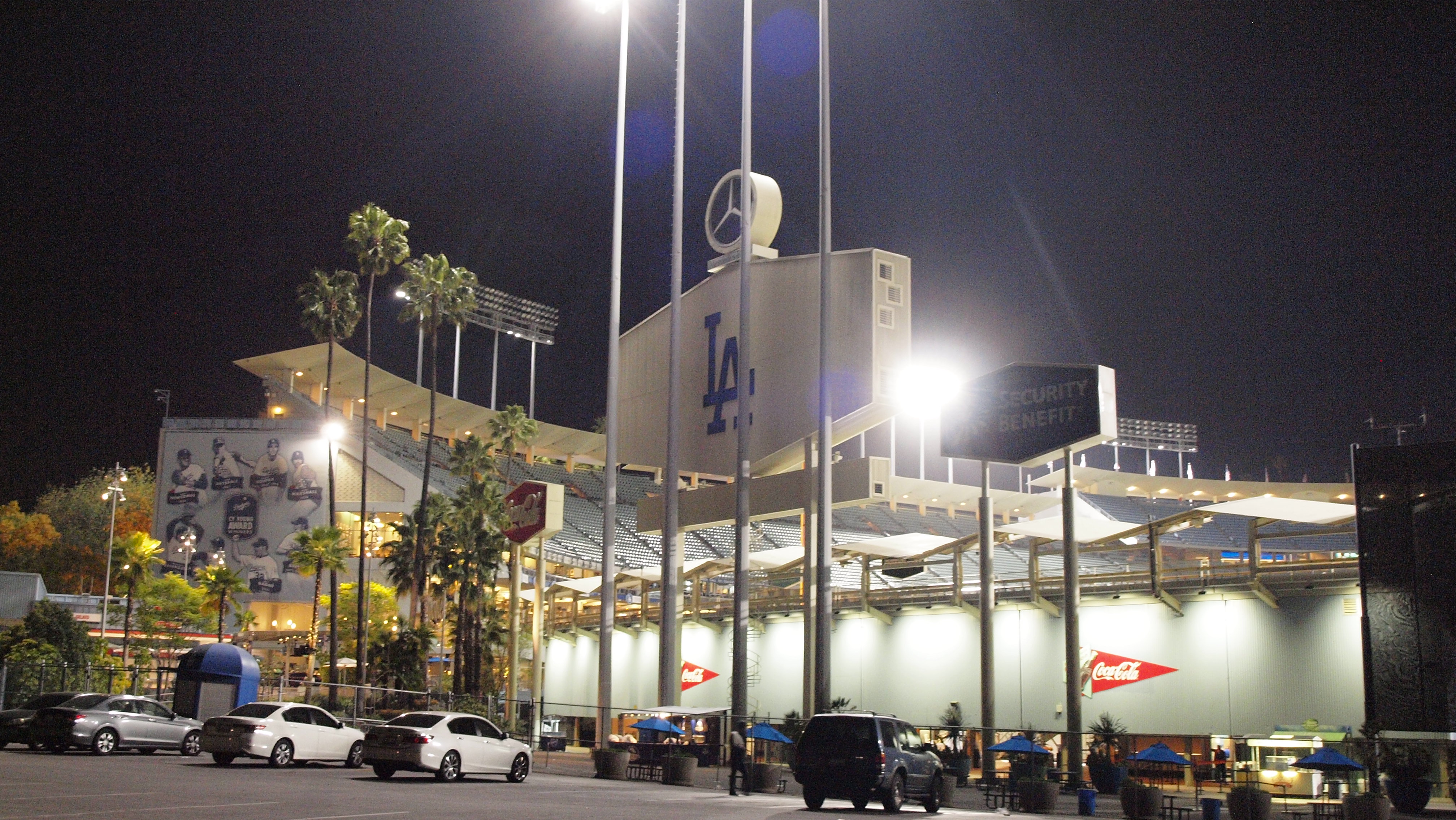 The game was a sellout, and there were going to be pregame ceremonies with Rachel Robinson, Jackie’s wife. I arrived early because I didn’t want to miss a second of anything.

Dig the Vin Scully t-shirt on this guy. I’ve gotta get me one of those…

The grounds crew were hurriedly finishing up on a large Number 42, just beyond second base.

What a cool experience it was to see all the players decked out in Jackie’s number 42. Even the Giants looked acceptable.

The sun was setting behind home plate, drenching the outfield in baseball twilight.

Rachel Robinson was escorted on the field by Magic Johnson (clapping) and Frank Robinson (on Mrs. Robinson’s right), the first African-American manager in the bigs.

The first pitch was symbolic and emotional, as Frank Robinson threw to Dave Roberts, the first minority skipper for the Dodgers franchise.

Vin Scully was in the booth and ready to go.

Dodger and Giants fans settling in for a good one.

Here’s Hunter Pence fouling one off Clayton Kershaw. You can see the ball just behind the umpire.

This shot is when Kike Hernandez doubled into the left field corner. The Giants are starting the relay throw in, and Dodgers are clearing the bases.

Here’s Kershaw bringing it from another angle.

This was the shot that spelled out for me what Jackie Robinson Day was really all about.

Tokyo rush hour? Mexico City traffic? Nothing compared to trying to get around during a sellout.

As we all know by now, the Dodgers pummeled the Giants 7-3. After the game, it was time for a Dodgers fireworks show. Fans streamed onto the outfield to watch. We stayed in our seats for an elevated point of view.

Watching the show, I felt like every time I heard a fireworks explosion, a Giant lost his wings.

After the fireworks, we headed out to the parking lot to grab our shuttle bus back to Union Station, and the train ride back home. Trouble was, a thousand other folks had the same idea at the same time. The sellout traffic jammed up our buses, so a pretty long line developed.

Follow that long line of trees on the left side to the horizon line. See those orange-yellow lights way off yonder? Waaaay off yonder? That’s where to board the shuttle buses. But there aren’t any buses, so the line has grown to a very large “U”. We are standing in the curve of the U.

But the Dodgers beat the Giants, so everyone was in an upbeat mood. The folks from Metro LA reassured us the buses were on their way, so the wait didn’t feel all that bad. After about 30 minutes a convoy of buses arrived.

We hopped aboard and said goodbye to Dodger Stadium. Until the next time.

14 thoughts on “It was Jackie Robinson Day, Dodgers vs Giants – and I was There”