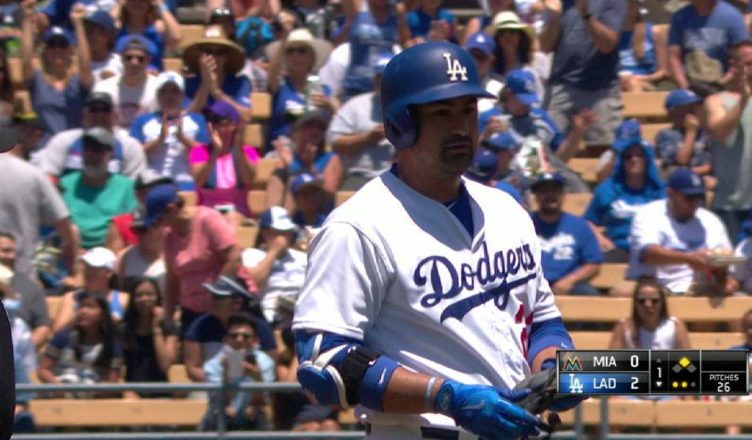 They’ve both been mired in season-long slumps. Young Joc had a wonderful Opening Day with a grand slam and five RBIs. After that, he went ice-cold at the plate. As baseball fate would have it, it seemed like every time he came up to bat, the bases were loaded, and Pederson would weakly pop up or helplessly strike out. He hadn’t hit a home run since that grand slam. Folks all around me on Twitter were calling for Joc’s head. For the past week they’ve lobbied for him to be sent down to the minors. Similar rumblings have been heard in LADRs comment section as well.

Today Joc came up in the fourth inning. There was nobody on, and there were no big expectations. It was just Pederson and the pitcher. Then this happened…

Pederson ended his day 1 for 2, with a home run, a walk, and two runs scored. It wasn’t earth-shattering, but here’s hoping it was slump-shattering. Being in the mix, scoring twice and contributing with a home run smash will help his confidence. It was all in all, a very good first step.

At least Joc had an Opening Day grand highlight – the File Cabinet hadn’t done much all season. Gonzalez came to Spring Training with a sore elbow, and he never seemed right from day one. I even wrote an article here advising the Dodgers to bench or DL him, as he had become an automatic out.

A few days later, Gonzo went on the 10-day DL. He returned last Thursday, but by his own admission (and our eye test), he still wasn’t 100%. Once again the Twitterheads were questioning the decision to keep playing Gonzalez. I wasn’t that harsh, but I was concerned about his batting fifth. That’s a little high in the batting order for a guy likely to come up two or three times a game with men in scoring position, and more often than not, two outs already in the bin.

The skipper, however, never lost faith in his man, and today that unyielding belief paid off – several times.

In the first inning, with two on and two out, Gonzalez came to the plate…

The File Cabinet was just gettin’ started. Gonzalez ended the day 3 for 4 with 2 doubles, a single and 3 RBIs. He even made a great sun-blinded catch of a foul ball a few feet short of the stands.

After the game the skipper had this to say: “No matter where I hit him, I trust Adrian Gonzalez with guys on base.”