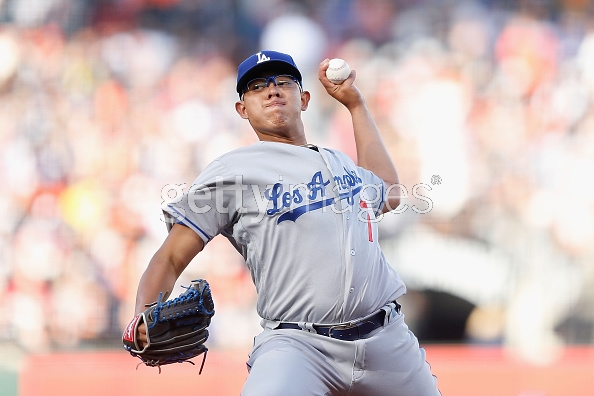 The rubber match between the Dodgers and the hated ones featured Julio Urias‘ fourth start (third on the road). His stuff was impressive at Dodger Stadium, but the kid has to get his pitch count down. The Giants threw a mostly left-handed lineup against him. Here’s how that battle played out.

2nd inning
Giants
First threat to Urias. Men on first and second, with one out. This was due to miscommunication between Justin Turner and Corey Seager, who let an easy infield pop fly drop between them.
Urias escaped.

But the kid needs some run support if he’s going to get a win.

5th inning
Giants
Urias started the inning at 65 pitches. He finished with an easy inning.

6th inning
Dodgers
Whole lotta nothing.
Giants
After a lead off single to Joe Panik, he gave up a home run to Brandon Belt. Giants 2-, and that was it for Urias.

9th inning  Giants 2-1
Dodgers down to their last three outs.
Adrian Gonzalez: Really a ridiculous choice here. Gonzalez tried a drag bunt for a single, but he delivered an easy bouncer to the pitcher for the first out.
Trayce Thompson: 6-3
Joc Pederson: 4-3

Julio Urias was definitely on his game tonight, and did very well against the first place Giants – in their park. He had the benefit of funky home plate shadows because of the awkward start time, but his mastery of his pitches remained long after the light evened out. His breaking ball was coming in at 74 mph, and the heater was in the mid-90’s.  The kid delivered a well-pitched game.

The big problem remained the missing Dodgers’ bats. They resorted (again) to the “no-rally-only-homers” style of offense. JT created a hole in the three spot, going 0 for 4.

This is the third time in the past ten games that the Dodgers squandered a quality start that their pitcher should have won. They leave the bay five games behind the first place Giants, deservedly so.