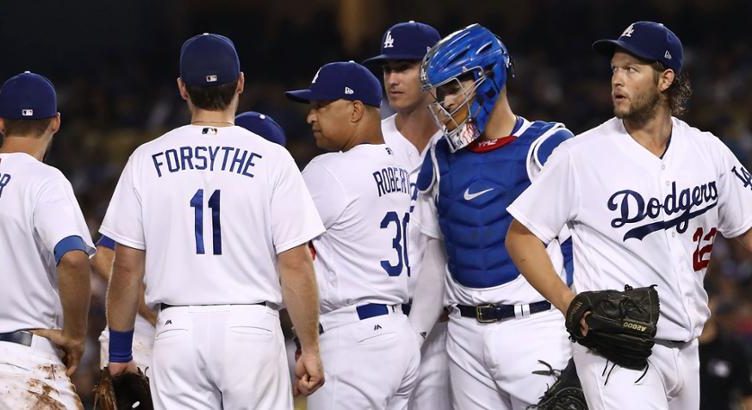 First off, the Dodgers – along with everybody else – were not-so-secretly hoping that good ol’ Clayton Kershaw was going to just bounce out to the mound and completely shut down the harmless little Rockies tonight. Well, that didn’t happen. In fact, the Rockies took a three run lead before the first Dodger dog of the night had mustard put on it.

Kershaw’s first three batters went like this: single, double and home run – and that was just the warning bell. Things just got worse from there, for the ace and the stingless Dodgers offense (we’ll get around to them in a minute).

We all know of Scott’s pet peeve about pitchers that can’t finish five innings; Kershaw was so ineffective tonight, he couldn’t even close out the third. He ended the night charged with four runs, despite striking out seven in his short stint. That’s just how big and bad this funk is that the Dodgers are stuck in.

The bullpen took over and went through five more pitchers. Two of them, Brock Stewart and Edward Parades, gave up five more runs, for a grand total of nine for the night. So the pitchers spotted the Rocks nine runs. How did their offense do?

In what’s fast becoming a habit, the Dodgers were no-hit for almost the first third of the game, but they broke through with a Chris Taylor single. He was quickly snuffed out by another of their recent habits – getting thrown out trying to steal second base. They scored their lone run in the fourth on a pair of doubles by Yasiel Puig and Cody Bellinger. After that, they resumed their suckiness.

What can we say about the boys at this point? I’ve always considered myself to be the resident optimist here at LADR, but this team’s ineptness is slowly but surely chipping away at that. However, before we all go down the rabbit hole of blue despair, there was one bright spot tonight.

The Dodgers fell so far behind (9-1) that Dave Roberts felt safe enough to unwrap the Dodgers’ first-round draft pick, Walker Buehler. He sent the kid out for the eighth inning, and we observers were not disappointed.

Bueler gave up a single to his first batter, but he rebounded quickly and eliminated his first-ever base runner with a 3-6-1 double play. He then got a ground out to end his first inning.

Happily, those of us who stuck it out to the ninth inning were given a small treat when Buehler came back out for the ninth. That’s when he recorded his first major league strike out – NL batting leader, Charlie Blackmon. His next two batters were a strike out and ground out. Mission accomplished.

Buehler threw six of the seven fastest pitches of the game. His fastball came in a 99 mph, and his curveball dropped to 83 mph. I’ll take this small bright spot with my shrinking blue optimism to bed with me.

I don’t want to think for one second about what to expect from this team tomorrow.

30 thoughts on “When Kershaw Can’t Stop the Skid…Brother, It’s Real (and Buehler is Real too)”