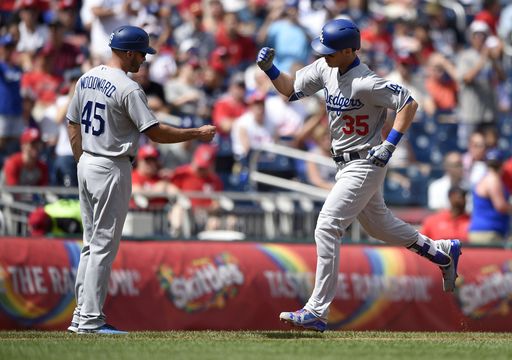 An important 4-game series with the Cardinals closed rather quietly Sunday night in a 5-0 defeat, however, taking 3 out of 4 and pulling even in the wild card race, while gaining a game against the first-place Rockies when they were in San Francisco is a definite win for the Dodgers. Over the weekend two decisions loomed rather large in getting LA to that point, and here they are:

Walker Buehler was attempting to finish off the best outing of his young career when he walked his second batter of the inning bringing up MVP candidate Matt Carpenter with the tying runs on 1st and 2nd. Dave Roberts had a decision to make as rested left-handed relievers Scott Alexander and Zac Rosscup were available to face the left-handed Carpenter. Buehler just threw his 100th pitch of the night, and although his velocity was just as strong now as it was in the 1st inning, his command had begun to waiver allowing his first two walks of the night earlier in the inning.

Zac Rosscup has not been used in these types of high-leverage situations often when Scott Alexander has been a rested arm out of the pen, so it’s unlikely Roberts would look to him here. Also, Carpenter has faced Rosscup five times previously, with a homerun and 3 walks.

Scott Alexander was the matchup the Dodgers would look to go to out of the bullpen for this at-bat, and very easily could have chosen to go with the left-on-left matchup or with a possibly tiring rookie starter on the mound. The history between Carpenter and the lefty is limited, as he’s only faced him twice, while striking out once.

Walker Buehler’s success against Matt Carpenter may have been the deciding factor in this decision as Carpenter had already struck out twice in three at-bats in the game, and was 0-6 with 5 strikeouts lifetime versus the rookie. Also, Carpenter is almost equally tough against lefties than righties, so a blind matchup play would not be a factor in this scenario.

In a situation where most managers would pull a young pitcher when facing the go-ahead run late in a game, especially with the high-leverage matchup lefty ready and rested in the bullpen, what would Roberts do in this most critical of spots?

The Result: Buehler was left in the game, and struck out Carpenter to end the inning. Dodgers won 3-0.

After surrendering a 3-0 lead in the bottom of the 4th on a grand slam by Patrick Wisdom, the Dodgers were looking to respond, and had loaded the bases with one out and Cody Bellinger at the plate. The Cardinals had gone to their lefty Tyler Webb to face Bellinger, who was 1-5 with a home run and a strikeout, previously off of Webb. Cody was hitting sixth and playing center field in the Dodgers’ left-handed dominated lineup against the Cardinals right-handed starter, John Gant. This meant that Dave Roberts had three options for this high-leverage at-bat: Let Bellinger face Webb in a lefty versus lefty matchup; pinch-hit Chris Taylor and leave in to play CF; pinch-hit Kike Hernandez and leave in to play CF.

The Case for Cody Bellinger: It was early in the game, and could be perceived as too early to be making major changes to the lineup, although they’re playing with a deeper than usual bench in September. He had at least some success against Webb with a previous home run when he was with the Padres. Cody has looked better against lefties in recent days, however, he’s still hitting just .230 against them with a 31% strikeout rate.

The Case for Chris Taylor: Taylor has seemed to come out of his nearly season long slump in the past week, hitting .391 with five extra-base hits in his last 23 at-bats. He’s faced Webb twice before with a single and a strikeout. Chris doesn’t necessarily prefer lefties, as his splits over the past two seasons are fairly even. He would be a seamless pinch-hit option, as he could slide into CF to replace Bellinger. The downside is he has nearly a 30% strikeout rate while leading the National League in strikeouts.

The Case for Kike Hernandez: Another seamless right-handed pinch-hitting option, Hernandez could also slide into Cody’s spot in the lineup and play CF. Historically, Kike destroys left-handed pitching, although his splits have evened out this year. He had just 1 hit in his last 12 at-bats, and a substantially higher ground ball rate of 46% compared to Taylor (34%) and Bellinger (39%), as staying out of the double play is an important note.

One of the most important parts of being a manager is knowing, or possibly feeling when your man is going to come through in a situation no matter what the numbers might say. It may not always work in their favor when they stick with their guy in a given situation, but Dave Roberts certainly knew his man this weekend, and it has put the Dodgers in control of their own destiny in the NL West and Wild Card races, as the biggest series of the season against the Rockies begins this week. A few more close decisions where the results tilt in favor of the Dodgers, as these two did this week, and LA could be tasting champagne in a couple weeks while celebrating their sixth consecutive NL West crown.

18 thoughts on “Know Your Man: Looking at The Dodger’s In-Game Decisions This Week”