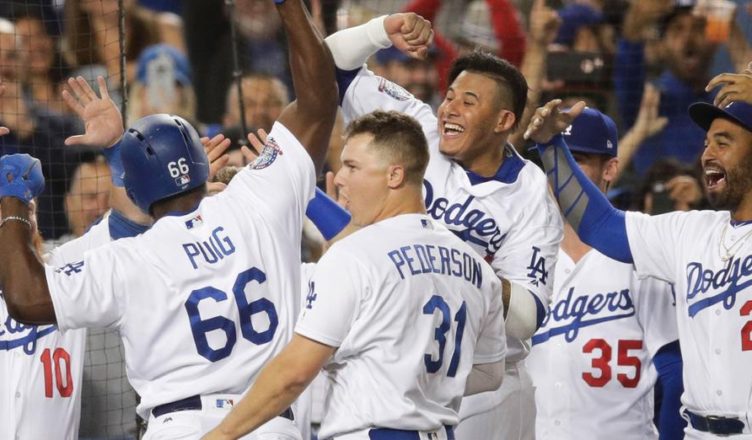 There are moments in a season that define a team. This series against the Colorado Rockies is one of those moments. The Dodgers have gone from a win some, lose some team, to looking like a break away division leader. They took the first two games of the series, and sent Walker Buehler to the mound with orders to finish the job, cement the Dodger’ lead atop the NL West, and further bury Colorado’s hopes.
Buehler and the Dodgers were quickly in trouble in the top of the first. A walk, an error, and a couple of base hits gave the Rockies a quick 2-0 lead.
Matt Kemp got the boys on the board in the bottom of the second with a solo homer that was so big, left fielder Parra didn’t even get out of “ready” position as the ball soared out. That HR gave the Dodgers a franchise-high seven players with 20+ home runs.
Buehler flirted with trouble again in the fourth, but remained in control of the Rockies with 10 Ks after five, but a high pitch count (83; 36 in the first).
He ended his night after six innings with a career-best dozen strike outs.
Brian Dozier, who barely missed hitting one out his first time up, got a hold of another Anderson pitch and bounced it off the CF wall for a double. It scored Enrique Hernandez from first and tied the ballgame at deuces.
Pedro Baez took over for Buehler in the seventh. He got one batter and Doc went to Caleb Ferguson, who finished the inning with a DP.
In the seventh, Max Muncy walked and Yasmani Grandal doubled into the RF corner to drive Muncy to third. And then Puig happened…
Genius manager Roberts pinch hit Puig, and boy, it paid off! The Wild Horse blasted a monstrous 3-run bomb followed up by a mile high bat flip.
The ever-improving Kenley Jansen took over in the ninth and pitched 1,2,3 inning to seal the deal. The Dodgers won 5-2, and took a solid 2 1/2 games lead in the NL West.  The Dodgers are finding their 2018 identity, and believe it or not, it’s looking stronger than the 2017 model.

13 thoughts on “Puig Gets Curtain Call, and it’s Curtains for the Rockies”