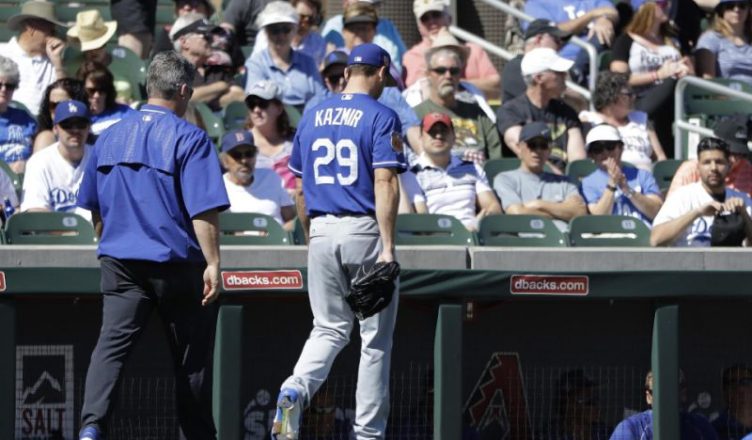 Just when Scott Kazmir was making progress in his quest to return to the Dodgers’ starting rotation, cruel fate stepped in and shoved him right off the mound in his start against the Colorado Rockies today.

Kazmir was scheduled to pitch two innings, but he didn’t get anywhere close to that modest goal. The Dodgers figured he would toss about 45 pitches today, but he was lucky to get 14 in.

Things began well enough. Kazmir gave up no runs, only one hit, and struck out one in his first inning. He went out to the mound to begin the second, threw one pitch, and that was that. He stopped, the skipper and the Dodgers’ trainer came out to the mound, and then Kazmir walked back to the dugout, leaving huge question marks in his wake.

David Vassegh reported Kazmir felt tightness in his hip and all down his left side during his pregame warmups. As a result he was unable to generate any power in his pitches.

33-year-old Kazmir is in his second year with the Dodgers, and this one is starting out just like his first injury-plagued season with the club. He believes his troubles last season began with that same tight hip and compounded with overcompensation that affected his delivery. That in turn led to neck and shoulder problems that sidelined him in August.

In his first outing this spring, Kazmir had results that were similar to today’s. He did well enough in his first inning, and then the wheels came off. In the second inning he gave up a double, walked two and had a wild pitch before being pulled.

Everyone is now in a holding pattern, waiting for an MRI on Kazmir.

There’s no shortage of arms vying for spots in the Dodgers’ starting rotation, but with today’s setback, Hyun-Jin Ryu‘s questionable spring, and the trading away of Jose De Leon, things are getting very interesting.

Chris Hatcher was LIT UP by the Rockies. Not good.

Corey Seager will be sidelined (back trouble) until Friday, and by the way, the Dodgers lost to the Rockies 10-9.

On the bright side: Joc Pederson blasted an opposite field home run.

No Dodger game on TV tomorrow, but they’ll be available via radio. Small victories.