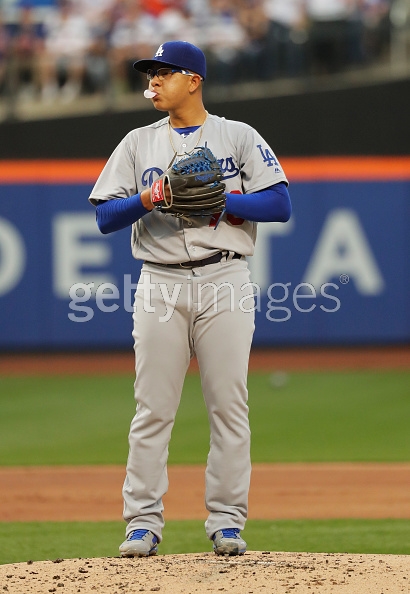 It was Game One of a weekend series in the Big Apple, and there was plenty on the plate. It was the first chance for Citi Field fans to see Chase Utley since the bitter NLCS of last season, and of course, the debut of the teen-aged phenom, Julio Urias.

Oh yeah, some guy named Jacob deGrom pitched for the Mets.  This is how it played out.

Dodgers
Julio Urias bunted (deGrom Error ) to load the bases.
Chase Utley – Sac fly to bring Yasiel Puig home. 3-1
Mets
At 2 2/3 innings, with the bases loaded, and after 81 pitches, Urias’ debut was done.
Chris Hatcher in.
He got deGrom for the third out.

4th inning  Mets 3-1
Dodgers
Justin Turner and Adrian Gonzalez, the first two men got on. The Dodgers left them there.
Mets
Hatcher got three Ks, but David Wright hit a 2-out solo home run. 4-1

Bases cleared! Tie score! 5-5
Mets
Pedro Baez in.
Baez grooved one to Curtis Granderson. Right down Broadway. What do you think he did with it?
Ka-Boom! 6-5 walk off home run.

Julio Urias gave up three runs in the first inning, and he didn’t even make it out of the second. Some might call that a failure. While it certainly was anticlimactic, I think Urias did fairly well considering the circumstances surrounding his hurried debut.

He was rushed into the start. He had to fly cross-country into hostile territory, and barely had a New York minute to get familiar with his coaches and catchers. Throw in a teenager’s first time in NYC, and I’m surprised the kid didn’t puke his guts out before throwing the first pitch!  He did well enough, considering.

They had a great 9th inning that was capped off by the Mets’ enemy, Chase Utley. Unfortunately, the excitement, drama and happiness – as well as the win – were all destroyed by the Dodgers’ enemy – themselves.

I sure wish we had another rookie phenom to try out tomorrow.