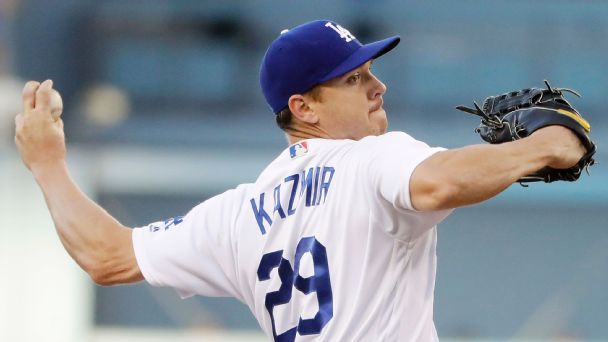 There are only two pitching slots available in the Dodgers’ rotation, as Clayton Kershaw, Rich Hill and Kenta Maeda are the established Big Three. That leaves a half-dozen men on the outside battling to get in.

Hyun-Jin Ryu and Scott Kazmir are both trying to do it with the specter of past injuries hovering over the mound every time they pitch. Ryu has been missing in action for the past couple of seasons due to elbow and shoulder injuries. Since he’s only pitched for the Dodgers once since 2014, it would seem his is the higher hill to climb.

“I only pitched one game the last couple of years so there are question marks around my name, just like 2013 when I first got to the Dodgers. There definitely are things I need to prove to the organization to be in the rotation.” – Hyun-Jin Ryu

Ryu came into camp with a clean bill of health, but his first bullpen session stirred up the winds of concern when his fastball could not top 86 mph. He later threw a live batting practice and the batters reported Ryu had good command of his pitches. He didn’t fool a lot of batters, as he gave up a lot of contact.

Scott Kazmir is coming off neck and back injuries that shut him down too often in the second half of the 2016 season. He didn’t even make the Dodgers’ 2016 post-season roster, so Kazmir’s a man with something to prove as well.

Manager Dave Roberts said today that Kazmir is likely to get the start against the Giants on Wednesday, while Ryu stays home and throws another bullpen session.

Per Eric Stephan: The Dodgers want Ryu to pitch on the back fields under a more “controlled environment”.

Controlled environment sounds an awful lot like having a couple of hovering coaches, no crowds, no distractions and most disheartening of all for the Ryu Marching and Chowder Society, no live batters.