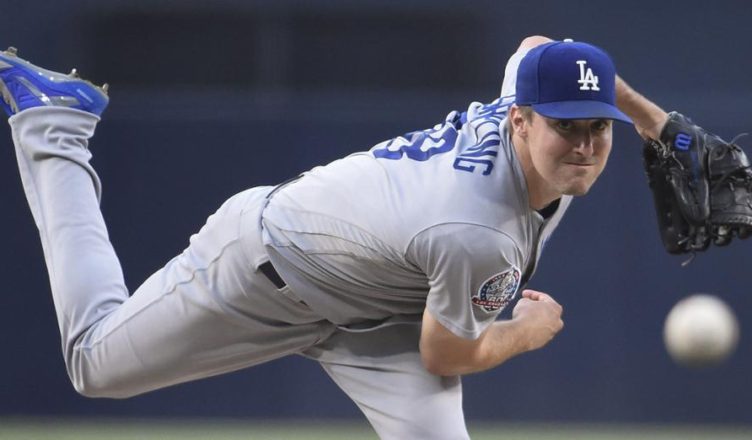 Stripling brought his “A” game and went six shutout innings, striking out six, giving up six hits, and walking one. The trouble was, Stripling came out of the game in a one-one tie because the Padres Ross, Tyson, was also shutting down the Dodgers. Ross had a no-hitter going until the middle of the sixth inning, when Joc Pederson broke it up with a double.

The Dodgers broke the scoreless stalemate in the seventh when Andrew Toles singled and brought in Chris Taylor, who had doubled earlier. Matt Kemp drove Toles home with the second run of the inning, and Joc Pederson got in on the action with an RBI single that scored Logan Forsythe (who was in to pinch run for Chase Utley).

Stripling was done for the night, so Dave Roberts called on Daniel Hudson, who immediately stunk things up with a walk and a single. Roberts yanked the chain on Hudson and brought in Scott Alexander. He got two quick strike outs and then gave up a two run double to Wil Meyers. The Dodgers managed to limp out of the inning holding on to a slim one run lead, 3-2.

The newest front office pick up, Dylan Floro, continued to impress with a spotless eighth inning. Boy, that guy’s got wicked movement on his pitches.

I can’t say the same about Kenley Jansen, however. Sure he picked up the save tonight, but once again, it wasn’t easy, and it included putting the tying run on base. Jansen’s got impressive numbers on paper, but I’m not convinced he can be trusted over the long haul with increasingly pressure-filled games.

That said, a big bright spot tonight was Chris Taylor. He flashed the leather and spoke loudly with his bat. He saved a run with a brilliant stop of a screamer between third and short, made a great catch for a big out in the ninth, and came up with a double and scored a run. Give the kid a ring of the bell.

The Dodgers took the San Diego series three games to one and will face the Angels at home before the All Star break.

PS…The Dodgers are in sole possesion of First Place in the NL West for the first time this season. Stay tuned!

22 thoughts on “Still No Home Runs, but Dodgers Find a Way to Beat Padres 3-2”