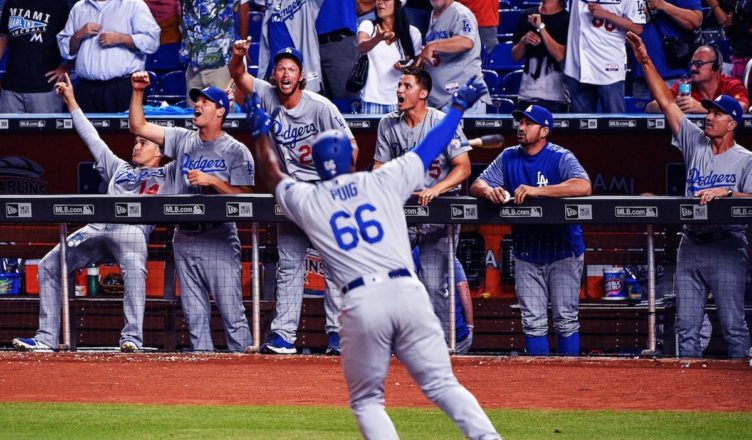 “What a team! What a team!” That was the rallying cry often heard from Kirk Gibson during the Dodgers’ last trek to the top of baseball’s highest peak, the World Series. It rang true then, and just under thirty years later, those words ring just as true for this squad of never-say-die, never count ’em out, boys in blue.

Just before the All-Star break, I ran a column featuring my Top Five Moments from the First Half of the Season. Last night, in their first game back after the break, the Dodgers didn’t waste any time getting right back to business, and added the first magical moment of the second half.

Things started out like a normal baseball game, with a run here and there, as the score ping-ponged back and forth between the Dodgers and the Marlins. The fish took a 4-3 lead into the ninth inning, and then the game stopped being MLB normal, and morphed into the “new normal” that is Dodgers baseball 2017.

With two out in the top of the ninth, Joc Pederson rapped out a two-strike single to keep the Dodgers’ hopes alive. Then Yasmani Grandal stepped to the plate as the go-ahead run. As so often happens to opposing pitching staffs in this new normal, the Marlins pitcher lost his bearings and he wild pitched Pederson to second. He then walked Grandal.

Yasiel, who had already homered once in the game, stepped to the plate, and every Dodger fan slid forward in his or her seat.

Puig was quickly behind two strikes and the pitching yips struck the Marlins again. Another wild pitch moved both Pederson and Grandal into scoring position. The boys were down to their last strike, but everyone from the Big Dodger in the Sky to the folks stuck in LA traffic and listening to the game on the radio knew – JUST KNEW – Yasiel Puig was going to come through.

What a team, indeed…and I have a feeling they’re just getting started.