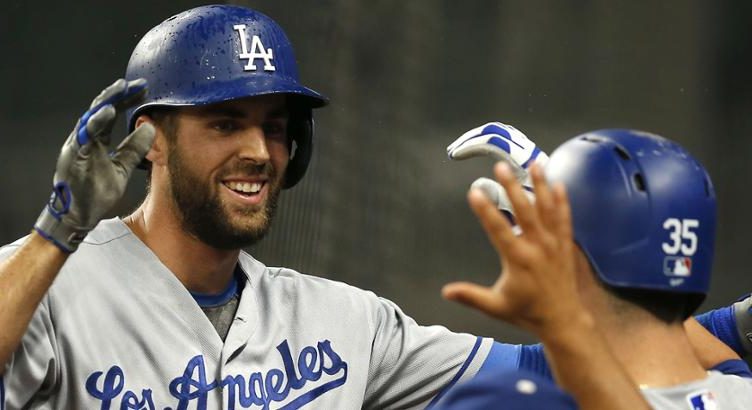 Alex Wood notched his 13th win, but it wasn’t exactly easy. Wood gave up a run in the first inning, and he needed help from his defense to get him out of a couple of close jams, including a bases loaded with no out situation in the fifth inning. The Dodgers were ahead 2-1 at the time, and the Braves loaded the bases behind two walks and a single.

Wood brilliantly picked off the man on second for the first out, and then he got a double play to end the inning. The threat was stopped, Atlanta’s momentum broken, and the Braves never recovered. The Dodgers went on to score three more runs on their way to victory.

Shortstop Corey Seager also contributed to the defensive efforts with this leaping catch.

The Dodgers’ steamroller offense was firing on all cylinders tonight. Yasiel Puig and Chris Taylor got the scoring started in the third when Puig walked and then Taylor did this…

Taylor batted leadoff with had three hits, two RBIs, and he scored three times. He’s now batting a very solid .313 with a .913 OPS.

The Dodgers scored again in the sixth when Justin Turner brought in Taylor with a deep sacrifice fly. That put the boys ahead 4-1, and they never looked back. They scored two more in the seventh on an Enrique Hernandez single to bring in Logan Forsythe, and Austin Barnes brought home a run on a Yasiel Puig double play.

The Dodgers scored their seventh run when Austin Barnes doubled to bring home Logan Forsythe. Forsythe boggled my mind today as he continued to struggle at the plate, and later added booting and bobbling balls to his act. Yet the man got a hit, walked once, and scored twice. I’m going to be keeping a close watch on him.

Oh yeah, newest Dodger, Tony Ciangrani came in and quickly gave up two singles and a three run bomb to close the gap to 7-4. He settled down and got the three outs to finish off the game. Hopefully that was a case of jittery nerves pitching for a new team. Guess we should keep a close watch on him too.

We’ll all be keeping a watch on the Dodgers and their newest starting pitcher, Yu Darvish, tomorrow from New York. Don’t miss it.