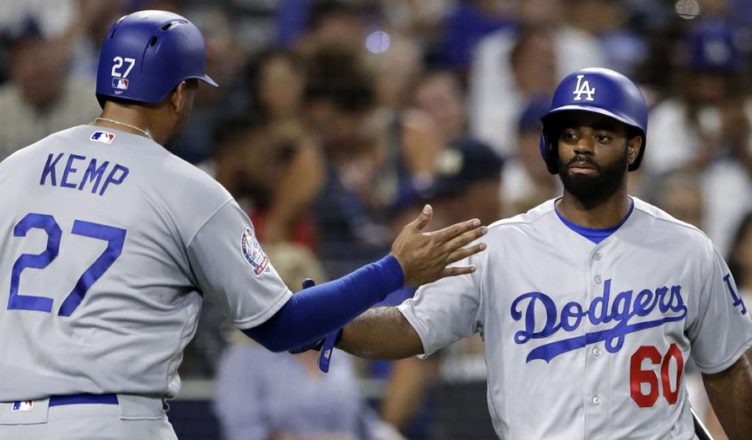 The Dodgers opened a four-game series against the Padres down in San Diego tonight, and they returned to the well-oiled blue machine that went missing in Anaheim over the weekend. Clayton Kershaw took the mound and he was magnificent. Kershaw went six stress-free scoreless innings. It was Kershaw’s first shutout start of the season. He punched out five Padres and allowed just two hits, while walking one.  Granted, this was the hapless Padres, a team of free swing-and-missers, that matched up perfectly for the old ace, but Kershaw still had to mow them down, and that he did.

On the offensive side of the ball, the Dodgers took advantage of Padres starter Perdomo in a five run, fourth inning. Yasmani Grandal got the scoring going with a double that scored Cody Bellinger, who had doubled to lead off the inning himself. Chris Taylor singled in Matt Kemp for the second run of the inning, and then Andrew Toles banged out the third double of the inning – right off the base of the CF wall – to score Grandal and Taylor. Toles brought home the fifth and final run of the inning on a FC by Joc Pederson.

The Dodgers later rallied home one more run in the seventh and two in the eighth. Justin Turner and Cody Bellinger’s bats gained some heat tonight as Justin Turner knocked in two RBIs and Bellinger made up for two atrocious rally killing double plays last night against the Angels. Cody’s swing was much more disciplined and accurate, which resulted in two crisp doubles.

Andrew Toles had a very good night in his return to the Dodgers. He went two for three with a walk and two hits. He had two RBIs, and he also scored two of the Dodgers’ runs, which included one spark plug score from third on an infield bouncer. Toles had a good secondary lead from third at the time and he broke for home on contact. He flew into home with a slide under the tag that took him on his belly a few feet beyond home plate. It was beautiful!

The Dodgers left eight men on base tonight, but the real stat to pay attention to is they also scored eight runs, all without hitting a single home run. By the way, Wil Meyers ruined the shutout with a solo home run in the bottom of the ninth, and the Padres scored one more to end things at 8-2.

With the Diamondbacks taking a day off, tonight’s win brings the Dodgers within a half-game of first place. Game two against the Pads tomorrow night.