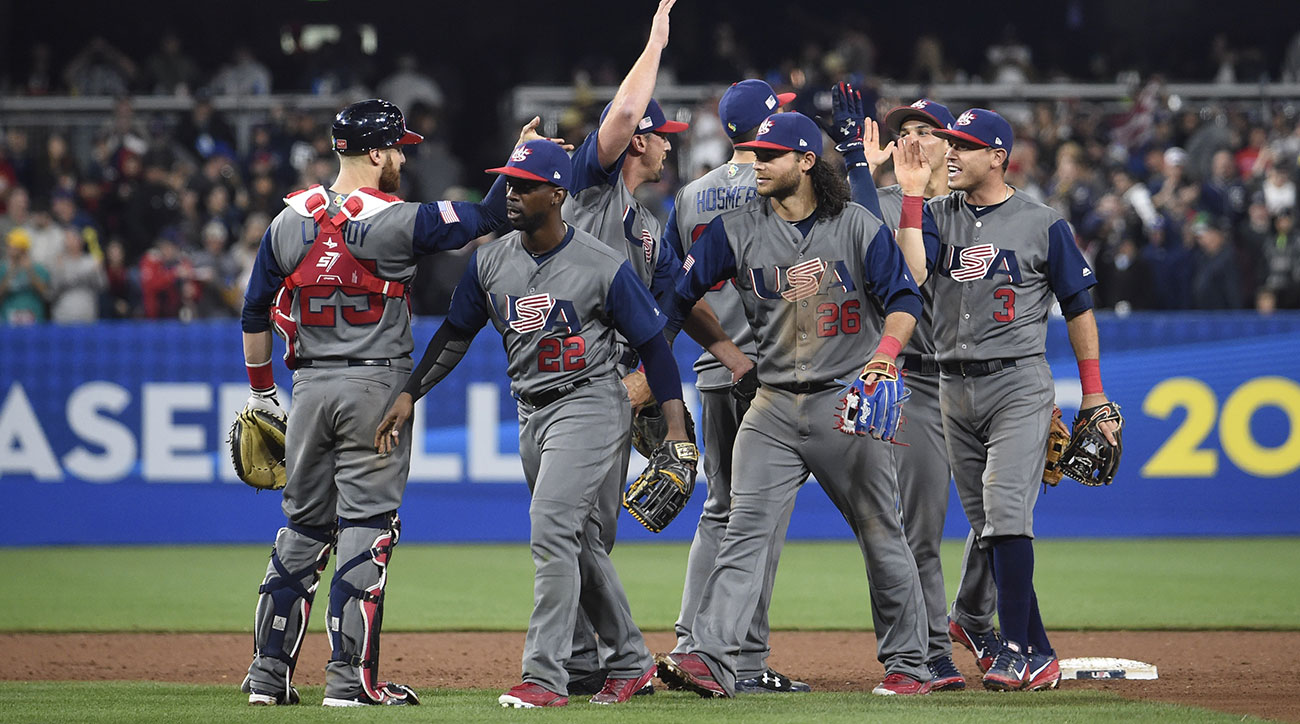 The World Baseball Classic is played only once every four years, like the Olympics. It’s not as popular over here as it should be. Some people have problems with the rules and contrived tournament style. However it’s important to note that Team USA had never won the World Baseball Classic since its inception. NEVER! That’s pretty hard to believe considering all of the talented players that have played for the United States, but here we are. Team USA had never even been to the Championship game before tonight and had reached the championship round only once (2009) in WBC history.

All of that has been erased because our beloved Team USA finally won it. The Americans defeated Team Puerto Rico 8-0 on Wednesday night in the 2017 WBC championship game at Dodger Stadium to capture the tournament title for the first time ever. What a huge win for American baseball. Of course it’s not as awesome as a Dodger world championship, but it’s something we should all take national pride in. Tonight we were all on the same club, rooting our country to victory. That’s what the World Baseball Classic is all about.

It was quite a sight as the Americans came into the game as heavy underdogs to the powerhouse Puerto Rico ballclub that came into the final game undefeated in the tournament. The Puerto Ricans had beat Team USA just a couple of weeks ago in the second round. Puerto Rico got to the championship game by narrowly defeating the Netherlands in the semifinals on Monday night by a single run. Speaking of narrow defeats, the USA handed one to Team Japan in the semifinals on Tuesday night to get here as well.

The pitching matchup pitted New York Mets rookie Seth Lugo against the talented Toronto right hander Marcus Stroman. Team USA was very well put together and their deep roster shined in the WBC finale as they destroyed the Puerto Ricans, jumping out to an early lead and dashing any hopes early on.

USA scored twice in the top of the third when Jonathan Lucroy singled to center and Ian Kinsler homered over the center field wall. Lugo was able to get out of the inning after walking Adam Jones by retiring Christian Yelich on a called strike three and whiffing Nolan Arenado and Andrew McCutchen.

The Americans kept at it and padded their lead with two more runs in the fifth frame. Kinsler singled, Jones walked and Yelich sliced a base hit into right to score Kinsler and put USA up 3-0. With Lugo clearly on the ropes Puerto Rico hooked Lugo and brought in Joe Jimenez. The USA was able to score one more run when two outs later McCutchen’s ground ball single to the hole at shortstop plated Yelich to put Team USA up 4-0. Javier Baez made a valiant diving effort but the ball was hit to deep in the hole.

Meanwhile on the pitching side Stroman was throwing a gem. He recorded a 1-2-3 inning in the bottom of the first. After a walk to old man Carlos Beltran leading off the bottom of the second, he induced Yadier Molina to hit into a double play. Then he finished the inning by striking out Baez.

Stroman tossed another perfect inning in the third, and another 1-2-3 inning in the fourth. Before you knew it, he was throwing a no-hitter. Stroman got three consecutive grounders in the fifth inning, and three more grounders in the sixth. He had everything working tonight, and didn’t allow a hit until Angel Pagan doubled in the seventh inning. By then it was 7-0 USA, but Pagan still did his best to pump up the listless Puerto Rican offense. Stroman finished with 6 shutout innings pitched allowing just one hit one walk and recorded three strikeouts. His performance earned him a well deserved MVP. He was killing worms all night.

The USA bats never let up. They put up three more runs in the top of the seventh inning. With two outs, Arenado singled and Eric Hosmer was hit by a pitch. After McCutchen walked to load the bases, Brandon Crawford’s single to center scored two and the Americans were now leading 6-0. After another Puerto Rico pitching change, Giancarlo Stanton immediately singles to left and the Americans had a commanding 7-0 advantage.

Overall the Americans scored eight runs on 13 hits and were 5 for 15 with runners in scoring position. Five players in the US lineup (Kinsler, Yelich, Arenado, McCutchen, Stanton) had two hits and McCutchen, Crawford, and Stanton each drove in two runs. Puerto Rico had just three hits on the day.

David Robertson pitched the final inning. The last out was recorded when Carlos Correa grounded to third. Team USA mobbed each other on the field as they hoisted a statue of the American eagle. Pretty patriotic if you ask me.

Maybe people will start to get more excited about the WBC now. The rules may not be perfect and Adrian Gonzalez may hate it because he’s kind of a sore loser (Mexico got knocked out on a tiebreaker) but this was an exciting tournament. Team USA gave us a lot of thrilling and dramatic moments that culminated in a championship.

Now all we need to perfectly bookend this baseball season is a Dodgers world championship. We now return you to our regularly scheduled Dodgers spring training slog. The boys in Blue play Thursday afternoon at Surprise Stadium against the Rangers with Clayton Kershaw on the mound. Let the flag fly high! USA! USA! USA!