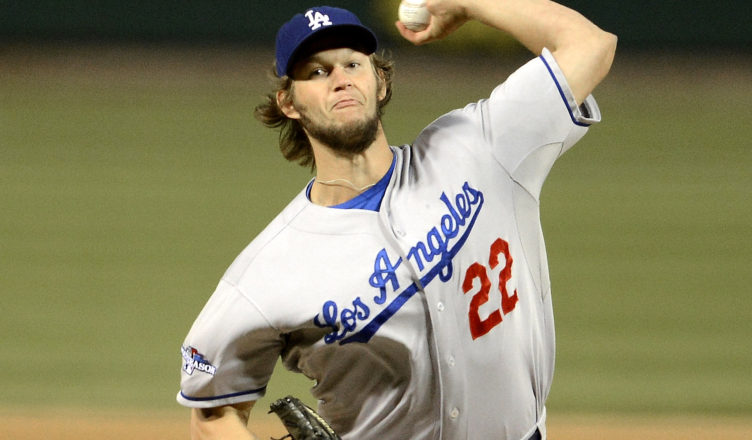 Clayton Kershaw went up against the Texas Rangers today and completely dominated them for six innings. He gave up just two hits, walked none, and struck out eleven on 92 pitches.

Kershaw started off strong, striking out five of the first six batters he faced. His curveball, named Public Enemy Number One by the venerable Vin Scully, was a thing of beauty today. It dropped out of the sky and plopped into the strike zone as batters stood hypnotized and frozen. Adrian Beltre literally danced backward out of the batter’s box when faced with its high rainbow arc.

Kershaw relied on his defense through the third and fourth innings, and the boys behind him did not disappoint. There weren’t many spectacular plays made, but that’s because Kershaw’s pitching allowed mostly soft grounders and routine fly balls.

In the fifth and sixth innings Kershaw returned to the strike out and picked up the final bulk of his Ks.

ESPN’s Buster Olney interviewed Kershaw when he came off the mound. One of Olney’s questions was what did Kershaw learn from being on the disabled list last season? Here’s what he said: “I learned that it sucks to be on the DL. I’m going to try not to do that again.”

As of now, The greatest pitcher in baseball looks plenty healthy and ready to go.

Logan Forsythe (batting lead off) and Chase Utley (batting second) combined for a one-two punch in the first inning. Forsythe rapped out a single and Utley provided a no doubt about it home run to right field that gave the Dodgers a 2-0 lead before the seats were warm.

Yasiel Puig came up big with two runners in scoring position. He worked the count full and then skillfully punched a line drive single to right that scored both runners. When the Rangers muffed the throw to first, Puig was alert and fast enough to take second base.

Andrew Toles then followed with a sharp hit to score Puig and put the Dodgers ahead 6-0.

Puig Learning Curve Part Two: Yasiel later came up with bases loaded and two out. The Rangers pitched him right by the book – low and away, low and away. Unfortunately he fell into bad habits chasing both pitches despite their sailing a mile off the plate. He then struck out on a fast ball just above his belt. Sigh.

62 thoughts on “Clayton Kershaw is Ready for the 1927 Yankees”