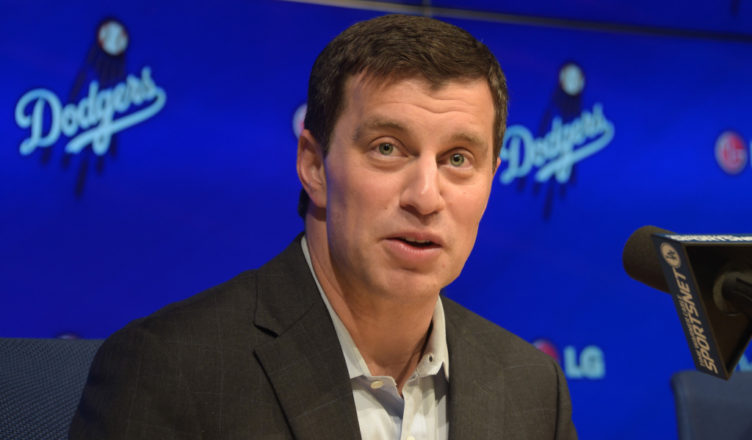 Despite the postseason failures, billions of dollars in revenue and the drones of frustrated fans president of baseball operations and money saving expert Andrew Friedman has decided to once again do literally nothing for another offseason. The Dodger’s lone free agent signing or addition of any kind was injury plagued former Oakland reliever Blake Treinen. Otherwise Friedman will be bringing back the exact same squad minus their best pitcher (Hyun-jin Ryu) who signed with the Toronto Blue Jays.

As per usual there was a multitude of PR generated and bogus rumors that had Friedman and the Dodgers in on every single top free agent on the market. There was also other rumors involving trade speculations of other great players like Francisco Lindor, Corey Kluber, Mookie Betts and David Price to name a few. If you know Friedman and you should be now, then you should have already been aware that none of those deals would ever become reality. He is far too cheap, single minded and timid to make any of those proposed acquisitions. He is perfectly content to sit on the sidelines and watch while other teams gobble up those available talented players like pacman.

One of the more interesting hogwash rumors involved the Dodgers acquiring a third baseman and moving Justin Turner to first base. I actually liked this idea. It made sense to try and take some of the wear and tear off of the lone Dodger playoff clutch hitter. Of course this ended up becoming like the majority of the other Friedman related rumors, it died on the board room. Like most of his ideas, it never came to fruition.

The Dodgers will carry almost the exact same roster in 2020. The position player club will see Cody Bellinger, a healthier Corey Seager and slugger Max Muncy leading what should be a very potent lineup again. Can AJ Pollock stay healthy enough to do anything? Alex Verdugo, Joc Pederson, Chris Taylor, Enrique Hernandez, and catcher Will Smith will round out the rest of the position roster. Top Prospect Gavin Lux should get the lion’s share of the playing time at second base. Let’s see if he can show us more than just flashes of why Friedman refuses to part with him in any swap. Per Friedman’s biggest sick fantasy, Mendoza line batter Austin Barnes will be returning to be the backup catcher, but get a lot of playing time. If Friedman had his way, not only would Barnes be the starting catcher, but the entire roster would consist of sub Mendoza line hitting utility players. Barnes is the worst hitting catcher in baseball (or one of the worst) and should have ample opportunity to catch Bill Bergen for the franchise record in hitting futility for a catcher.

The pitching staff is where Friedman has given the most neglect. With the departure of Ryu, and Rich Hill the missing rotation spots will be filled in by youngsters. I am glad to see the kids getting a chance, the Dodgers could have easily spent the money to retain Ryu, a long time Dodger and NL ERA leader. The rotation will have Clayton Kershaw, Walker Buehler, Kenta Maeda and rookies Julio Urias and probably Dustin May. Here’s where things get dicey. There is almost no depth of any kind. If any of the starters get hurt, the Dodgers have just swingman Ross Stripling, and rookie Tony Gonsolin on the 40-man roster who can make a start and have any kind of MLB experience.

The bullpen will be equally questionable again. Behind Kenley Jansen, the Dodgers will have long time setup guy and slow poke Pedro Baez. Unimpressive relievers Scott Alexander, Joe Kelly, and Adam Kolarek will occupy spots. Newly signed Blake Treinen joins the group as well. Again, the depth is razor thin. The group behind them includes Dylan Floro who can be effective at times, Caleb Ferguson and the execrable JT Chargois. Other guys (they are merely taking up space) include Casey Sadler and Josh Sborz. Yuck.

Friedman worshippers continue to spout claiming he’s about to acquire Lindor, Betts, or that he’s saved soooooooo much money! I think most fans would have been less angry if the Dodgers had actually advanced to the NLCS, had not gotten embarrassed at home and Adam Kolarek was not their only pitching acquisition at the trade deadline. Enjoy your Christmas Dodger fans. Let’s put 2019 behind us and look forward to a new chapter in 2020. Let’s all try and look forward to the future, because if it were up to Andrew Friedman, you would all have a lump of coal in your stocking. I guess he’s already given everyone a lump of coal by doing nothing again in the offseason. Merry Christmas everyone!