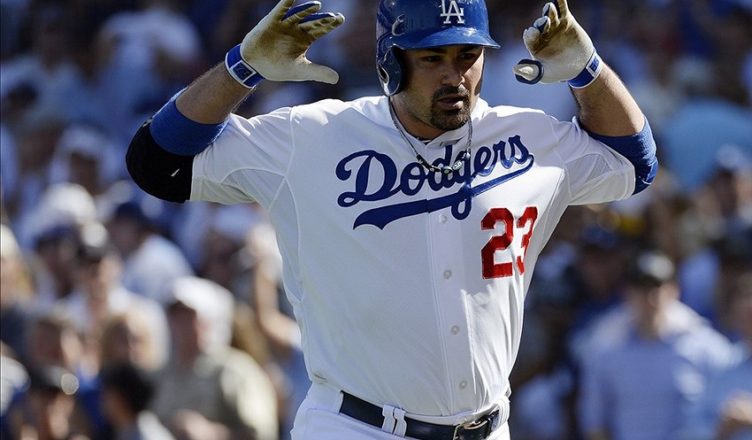 Would you like the good news first – or the bad news?

We’ll begin with the big news of the day from Camelback Ranch, which was reported by Ken Gurnick this morning: Adrian Gonzalez has been shut down for the first two weeks of Spring Training because of what Gonzalez referred to as “tennis elbow”.

It turns out Gonzalez noticed pain radiating from his elbow and down his forearm during his offseason workouts. He then shut down his own routine for the past ten days. The Dodgers staff examined him and decided an additional two weeks of rest should remedy the situation.

“It’s tennis elbow from just working out, too much hitting and boxing. I felt it while working out in early December and it didn’t seem like much, but it hasn’t gone away. They told me to take a few weeks off so it won’t linger and flare up and bother me going into the season. It’s precautionary. Better to take care of it now than six weeks from now.” – Adrian Gonzalez

In related news, this may slow Gonzalez’s participation with Team Mexico in the World Baseball Classic. We’ll see how that plays out.

Adrian Gonzalez has long been the iron man of the Dodgers. He played in 156 games last season, the 11th season in a row he’s played in that number. He’s remained a constant in the lineup despite being surrounded by players who are far younger. Since his first day as a Dodger, and just about every day since, he’s trotted out to first while far too many on the team fill the disabled list all around him, or don’t display enough day-in, day-out talent to remain in the lineup every day.

On the bright side, the Dodgers now have an easy excuse to get a longer look at Cody Bellinger and Scott Van Slyke at first base. Other veteran Dodgers with first base experience include Andre Ethier and Chase Utley.

Making room on the roster: Darin Ruff (acquired in the Howie Kendrick dump-off) was bunted over to the Korean baseball leagues. So long, Ruf. We barely knew ye!

The skipper declared Yasmani Grandal will be the Dodgers’ everyday starting catcher, regardless of whether or not the opposing pitcher is left or right-handed. Go get ’em, Yaz!