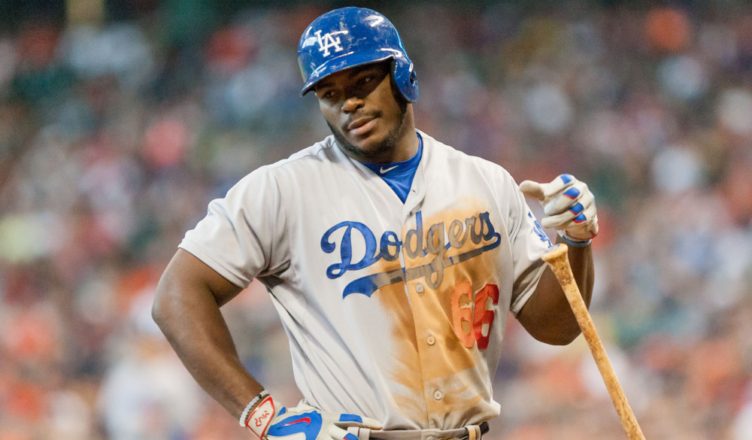 The Dodgers struck quick and often in this game. In the first inning, Justin Turner singled. Turner is the get on base machine. Manny Machado followed that with a two run shot and the score was 2-0.

In top of the fourth, Yasiel Puig hit a solo shot, his third of the series but his day was just beginning. The score was 3-0. In the bottom of the fourth, Rich Hill walked three straight hitters. Then Patrick Wisdom hit a grand salami. The red birds took a short lived 4-3 lead. In the top of the 5th inning, JT hit another single to start things. Max Muncy then walked.  Yasmani Grandal then walked ending Jon Gant’s night.

Cody Bellinger then singled in two runs and the Dodgers took the lead for good. Yasiel Puig then came up and smacked a three run shot and the Dodgers led 8-4. The route was on. In the top of the 6th, JT singled again. Max Muncy would single him in to make the score 9-4. Yasmani Grandal then walked followed by a Cody Bellinger single to score a run. The score was 10-4.

In the top of the 8th, Max Muncy walked followed by a walk by Cody Bellinger. Yasiel Puig smacked a three run shot and the score was 13-4. Puig’s third homerun of the day and fifth of the series. Rich Hill left after 5 innings. Dylan Floro pitched the 6th inning. Pedro Baez pitched the 7th inning. Ryan Madson pitched the 8th inning. All scoreless. In the top of the 9th, a sighting of Brian Dozier as he doubled.

Enrique Hernandez then walked. Andrew Toles came and reached first base on a Cardinals error. Hernandez scored on the play. Cody Bellinger then hit a three run shot and the score was 17-4. In the bottom of the 9th, Julio Urias pitched a scoreless frame and the Dodgers won. The Dodgers now lead the 2nd wild card race by one game. The Dodgers will conclude the four game series with the Cardinals tomorrow. That game is important for if the Dodgers win they will hold the tiebreak over the Red Birds. If Colorado Rockies lose tonight the Dodgers will be in first place.

23 thoughts on “The Yasiel Puig show”