Skip to content
Home > NLDS Previews/Recaps > NLDS Game 3: Blame it On The Wind

Everyone will be talking about that deep fly ball off the bat of Gavin Lux with two outs in the bottom of the ninth that looked like it was going out to tie the game. Instead the gail force winds at Dodger Stadium on Monday night kept that ball in the park as the home crowd watched it caught at the wall for the final out. The Dodgers lost 1-0 pushing the team to the brink of elimination with one more game at Dodger Stadium tomorrow night.

It didn’t seem fair because Dodger Starter Max Scherzer was nearly flawless tossing seven dominant frames allowing just one earned run on three hits with one walk while striking out ten. The lone mistake was a lead-off solo home run to Evan Longoria in the top of the fifth. That was the difference in the game and the wind did not stop that ball from going out. Call it what you will.

The Dodgers only had one legitimate chance to score in the bottom of the seventh. With one out consecutive singles from Steven Souza Jr. and Will Smith put runners on first and second. For some unknown reason, with the game on the line and the most important plate appearance of the game Dave Roberts made the worst decision of the year having Austin Barnes pinch-hit for Billy Mckinney who had pinch-ran for Albert Pujols earlier in the game. Not surprisingly he struck out. I understand that Barnes has had a couple of big hits in postseasons past and perhaps Roberts wanted to save Lux or Matt Beaty for the ninth, but Barnes is a terrible hitter and never should have been up there. Their last chance was Mookie Betts, who smashed a line drive that looked like it was going into left field, but Brandon Crawford leaped like four feet into the air to make the catch and rob Mookie of a game defining hit.

Now the Dodgers have to win tomorrow to force a game 5 in San Francisco on Thursday night. I don’t see this happening. Especially when they don’t have anyone to start tomorrow. Their best bet is to go to Walker Buehler on short rest and pray. This series is over. I know they came from behind to win three in a row to beat the Braves last year, but this isn’t last year and the Giants are not the Braves. Honestly the Giants won 107 games for a reason. Tomorrow should be the last game. We haven’t see real pain in a while. This will be on a whole different level. Brace yourself. 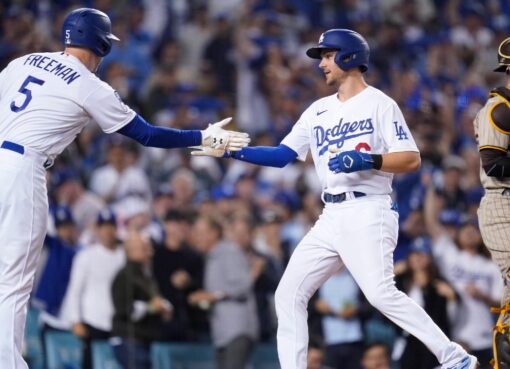