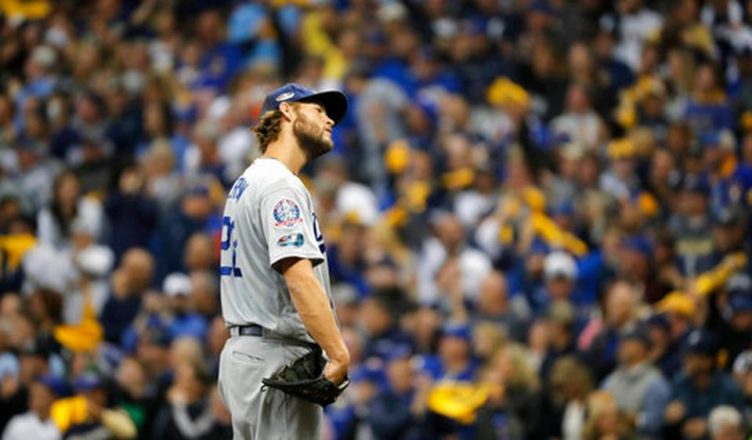 In the bottom of the third the game changes. Brandon Woodruff who is a pitcher took Kershaw deep to tie the game. In the inning, Yasmani Grandal has two passed balls and two errors. Kershaw had to extend himself as he couldn’t put hitters away and ended up giving up another run in the inning and the Brewers took a 2-1 lead. In the bottom of the fourth, with a runner on first Orlando Arcia hit a single and then an error by Chris Taylor moved runners to 2nd and 3rd.  Pinch hitter Domingo Santana hit a single to score two runs. The Brewers took a 4-1 lead and Kershaw’s night was over.  The shortest post-season start of his career. The defense didn’t help. Ryan Madson came in a gave up a run and the score was 5-1. The Dodgers were stuck on one hit for the longest time.

The Dodgers were stuck on one hit for the longest time until Chris Taylor hit a single in the 6th inning. Josh Hader for the Brewers pitched three scoreless innings and pitched the most pitches he’s pitched this year. Julio Urias pitched the 7th inning and gave up a solo shot to Jesus Aguilar and the Brewers took a 6-1 lead. The Dodgers rallied in the 8th inning.  Yasmani Grandal singled, Joc Pederson hit into a fielders choice. Chris Taylor singled. Justin Turner then struck out on a questionable call. Max Muncy then walked. Manny Machado hit a single on a full count to score two runs.

We got a game on our hands. #NLCS pic.twitter.com/vC6SmbJN8B

Matt Kemp followed up with a single to score a run and the score was 6-4 Brewers. Yasiel Puig came up to bat with a chance to take the lead and struck out. In the top of the 9th with two outs, Joc Pederson took the count full and walked.  Chris Taylor on the next pitch hit a shot in the gap that went off Lorenzo Cain‘s glove and he tripled scoring a run to make the score 6-5. Justin Turner came up to bat as the lead run. He struck out for the fourth time in the game and the Brewers held on 6-5. The home run by Woodruff was the difference.

The Dodgers fought hard and will come back tomorrow with Ryu at 1:09pm for game 2.