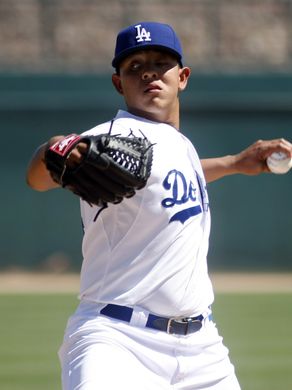 Well folks, you asked for it – nay, you pleaded for it, begged for it, and demanded it. The day for Julio Urias to take the mound for the Dodgers is just around the corner.

Urias will start tomorrow, Friday night, against the Mets, in New York City. It may not be Yankee Stadium, but it is Gotham, and there is perhaps no bigger baseball stage than Los Angeles in the game.

Urias will be taking Alex Wood‘s slot. Wood is suffering from arm soreness, so his start is being pushed to the next series against the Cubs.

Nineteen-year old Urias has been pitching in AAA, Oklahoma City, and is coming off a 27-inning scoreless streak. He has an ERA of 1.10, WHIP 0.78, and 44 stike outs.

Urias will be the youngest Dodgers starter since Dick Calmus in 1963. His fellow countryman, Mexican-born Fernando Valenzuela was also 19 when he joined the Dodgers, but El Toro began as a relief pitcher, and did not start for the big club until the following year, 1981, when he was 20.

Many Dodger writers and fans have been chomping at the bit for this one. The youth movement in Los Angeles is about to take one more step. Look out NYC, here come the Dodgers!