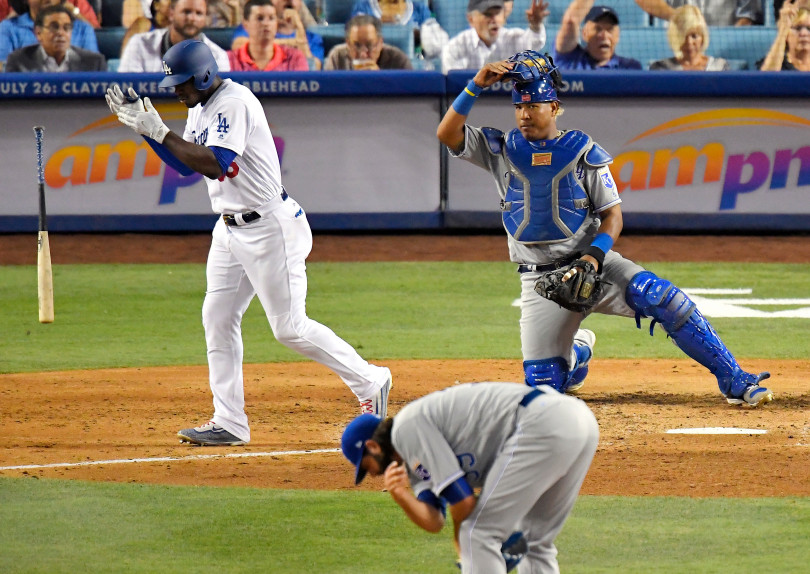 You’ll have to excuse me as I write this recap because I might be a bit delirious. It is 108 degrees out here in Southern California. A massive heat wave has swept across the southland. No word from meteorologists on whether that’s caused by a high pressure system in the gulf or the Dodger’s hot play. I might not be a weather expert, but I think it’s the Dodgers. The boys in blue continued their scorching baseball as they won their fourth consecutive game by defeating the Kansas City Royals 4-1 in the series opener at Chavez Ravine on Friday night. The Dodgers have now won 17 of their last 18 games and are 37-11 at Dodger Stadium. Chase Utley drove in his 1,000th career RBI and Yasiel Puig homered as the Dodgers improved to 30 games over .500.

The Dodgers welcomed the equally hot Royals into Dodger Stadium for the final series before the all-star break. The Royals have been just a hot as the Dodgers going 18-6 over their last 24 games and had won four games in a row. But the Dodgers are a juggernaut this season. They’re an unstoppable force and no amount of opposing hotness can stand in their way.

Kenta Maeda took the mound for the Dodgers and pitched much better than I thought he would. Maeda is the kind of hurler that lives on pinpoint command. Maeda uses his control and sinking movement to be successful. Sometimes he lives on the outer edges of the plate. The problem is that when his control is off he has little to nothing on his pitches. He pitches way too much to contact and not enough swing and misses. So when his pitch count is at 83 by the third inning it’s because there’s  9 foul balls per at-bat.

Maeda was good tonight despite only pitching his obligatory five innings. He allowed just one earned run on four hits and struck out five. And with a little help from the bullpen and the bats he was able to win his seventh of the season.

The Dodgers were able to get to opposing starter Jason Hammel, but it took them a few innings. Hammel the guy the Cubs dumped in favor of Brett Anderson (HAHAHAHA) looked solid early on despite having a poor season overall.

The Dodgers were close to scoring in the bottom of the first inning but the Kansas City defense took away a sure extra-base hit from Chris Taylor. Logan Forsythe (who’s been very hot) walked and one out later Taylor sent a deep drive into center that looked like a for sure extra-base hit. However Royal’s center fielder Lorenzo Cain had other plans as he made an incredibly great leaping catch against the wall to rob Taylor.

Maeda worked his way out of a jam in the third frame when the Royals put two on. Maeda struck out Cain, getting him swinging on a low and away slider. The Dodgers put two on in the bottom half of the frame as well. Forsythe walked and Taylor reaches on a swinging bunt nubber that Hammel fields off the mound but was unable to get Taylor. He runs too well. But Cody Bellinger struck out and Joc flied out.

The Royals got to Maeda first. With two outs in the fourth inning Mike Moustakas, also known as Moose, doubles on a liner down the right field line. Alcides Escobar singles into center to score Moose and put the Royals up 1-0. With Alex Gordon at the plate Escobar tried to steal second, but Yasmani Grandal gunned him down to end the inning.

The Dodgers came roaring back in the bottom of the fourth to score two and take the lead. Utley singles to right and after Puig whiffed, Maeda helped himself by poking a single through the left side of the infield, sending Utley to second. The red hot Forsythe grounds a single to right to score Utley. Corey Seager joins the fun with a single to right as well and the Dodgers lead 2-1.

The Royals threatened in the top of the fifth, but Maeda got out of it. Gordon led off with a double and Hammel’s sacrifice moved him to third. With the Dodger infield up, Merrifield grounds to Utley and Gordon has nowhere to go. Maeda then gets Ramon Torres swinging on a breaking ball. He pumps his fist as he walks off the mound.

In the bottom of the sixth, Puig golfs a home run into the left field pavilions. That made the score 3-1 Dodgers. In the bottom of the eighth, the Dodgers scored again as Utley finally picked up his 1,000th career RBI. Joc doubled and Utley’s double sails over Cain’s head to score Joc and give the Dodgers a 4-1 lead. The Dodger Stadium crowd gives Utley a nice cheer as the veteran smirks.

The bullpen took things the rest of the way, tossing four scoreless frames. Josh Fields pitched the sixth inning and Brock Stewart tossed the seventh and eighth innings before Kenley Jansen retired the side in the ninth. 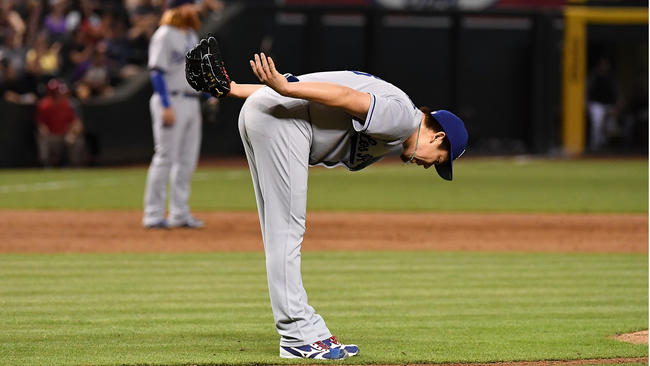 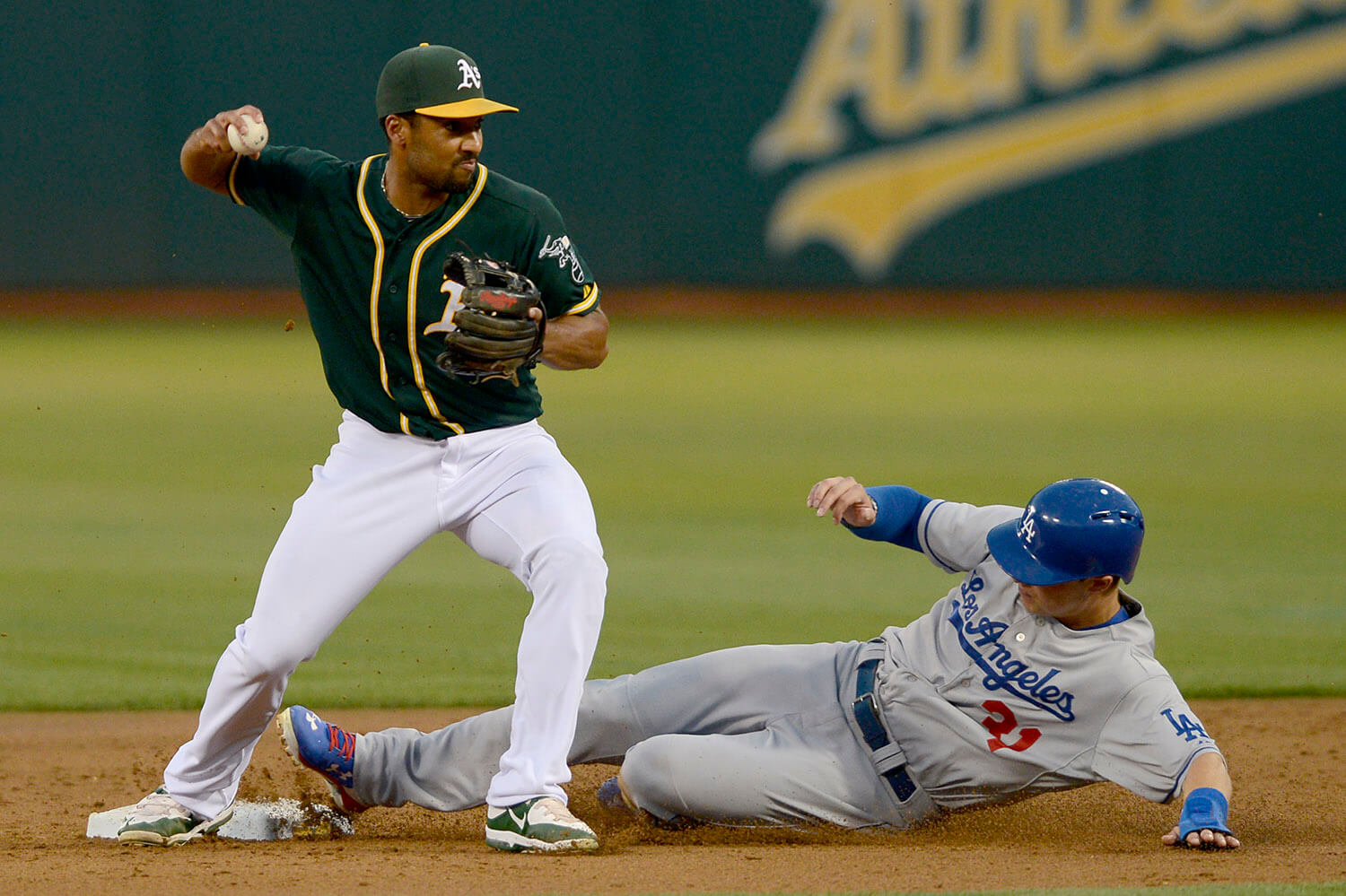