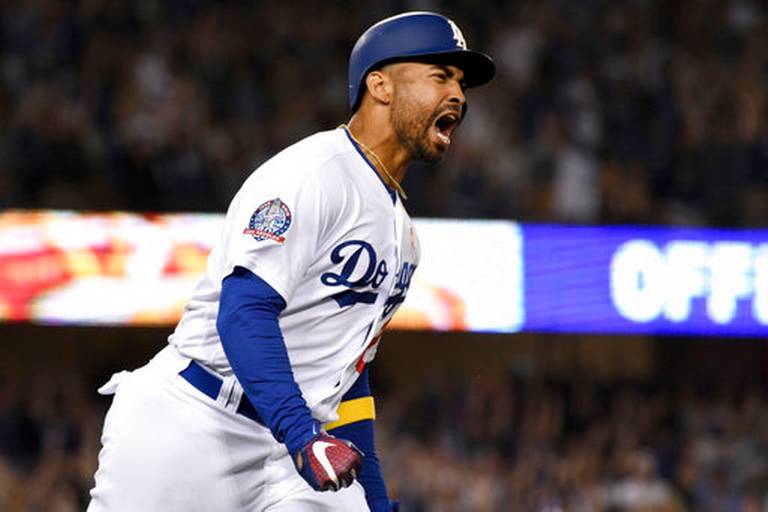 The Dodgers aren’t going down without a fight folks. For the second consecutive night the Dodgers rallied in the late innings overcoming a 2-0 deficit by scoring three runs in the bottom of the eighth. This time around it was Matt Kemp’s majestic three-run blast that gave the Dodgers the lead and eventual win. There were other contributions as well. There was Clayton Kershaw’s strong start. Manny Machado’s key walk against Archie Bradley in the eighth was pivotal, and Enrique Hernandez’s incredible diving play in the top of the ninth. Whatever it was, the 2018 Dodgers resembled the 2017 Dodgers as they beat the Snakes by a 3-2 score. The win moves them into a first place tie with Colorado just a half game behind both clubs.

Speaking of Kemp, he was the coldest Dodger in the lineup. Batting cleanup, he was 0 for 3 before he hit the home run in the eighth inning. I didn’t mind Kemp starting so much, but I cringed when I saw Austin Barnes penciled in yet again in the eighth spot. The Dodgers rolled out their all-righty lineup with Cody Bellinger, Max Muncy and Yasmani Grandal on the bench. Newly acquired David Freese was in the lineup too, playing first base. Freese got a hit in his first Dodger at-bat and also reached on a hit by pitch.

The two southpaws battled each other as the Dodgers and Dbacks were once again involved in another pitching duel. Kershaw has been pitching well lately, posting a 1.99 ERA over his last ten starts. Patrick Corbin has also been on a roll, posting a 2.24 ERA over his last 12 starts. It was no surprise that both hurlers locked in.

Unfortunately the Snakes got the drop on Kershaw first. Eduardo Escobar timed a first pitch fastball in the top of the second, slugging his 20 home run of the season to give the Dbacks a 1-0 lead. Kershaw was great the rest of the way. Entering the fifth inning, the Escobar blast was the only hit he had allowed. But in the top of the sixth, pinch-hitter Christian Walker took Kershaw deep again. The solo shot put the Snakes up 2-0. For the record Walker has hit two home runs and both have been against Kershaw this year. Baseball is strange people.

Kershaw wound up with a strong effort, tossing seven innings and allowing just the two solo home runs on four hits and not issuing a walk. He struck out only three, but induced weak contact most of the night. On the opposite end, Corbin shut the Dodgers down. He allowed just three hits across 5 innings of work, but was not as economical as Kershaw was. Corbin walked one and struck out seven. The Dodgers had squandered early opportunities, stranding two in the bottom of the second, wasting a Turner double in the bottom of the third, and leaving runners at second and third in the bottom of the fourth.

In the bottom of the eighth with the Dodgers still trailing 2-0, the Snakes brought in Archie Bradley to hold the two-run lead. Hirano had blown the Dodgers away in the seventh inning and the Snakes were likely hoping that Bradley could do the same over the final two frames.

With one out, Justin Turner flared a single over Ketel Marte’s glove into shallow right field. Then Manny Machado engaged in an epic battle with Bradley, fouling off several pitches before drawing a walk. Great at-bat! Kemp followed that by smashing a 1-2 hanging breaking ball over the left center field wall and off the black hitter’s tarp to give the Dodgers the lead! Dodgers up 3-2! What a moonshot ladies and gentlemen!

Up next Kenley Jansen. It’s the top of the ninth and Kenley was looking for his second consecutive save. David Peralta led off and smacked a grounder into the hole between first and second, but Hernandez had other ideas. What a play! With one out, an important out (you’ll see why in a minute) Kenley strikes out Escobar for the second out. However Nick Ahmed doubles into the gap as Chris Taylor slipped and fell down to put the tying run in scoring position. Had Enrique not made that awesome play, then the Dbacks would have tied the game. With the Dodger Stadium crowd on their feet, Kenley gets Marte to pop out for the final out. Dodgers win it!!!

The victory moves the Dodgers (74-62) into a first place tie with the Snakes. Colorado is just a half game behind after they won their game in San Diego. We’ve got one more to go tomorrow. The Dodgers look to take the series and first place on Sunday afternoon. Clay Buchholtz will counter Walker Buehler in the series finale. First pitch is slated for 1:10 PM PST. Let’s do this! 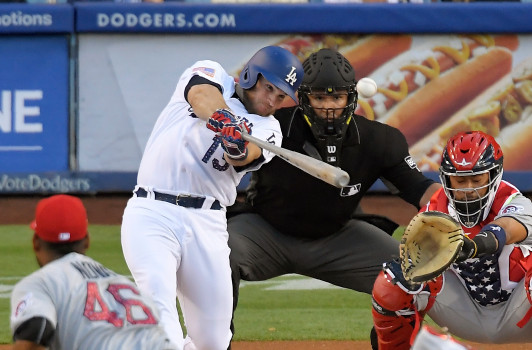 Dodgers Slug Another Six Home Runs, Beat The Snot Out of The Bucs Again